Zeiss 'in excellent shape' despite semiconductor drag on earnings 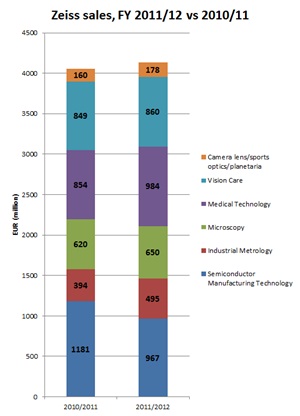 Carl Zeiss, one of the world’s largest and most widely recognized optics companies, has reported a slight increase in sales in its latest financial year, though overall profits were down sharply as spending on semiconductor equipment wilted.

For the year ending September 30, Zeiss registered sales of €4.16 billion, up 2% from the prior year's record high. But with the semiconductor division’s sales dropping 18% to €967 million, as well as a sharp increase in spending to develop extreme UV (EUV) technology, Zeiss posted earnings before interest and taxes (EBIT) of €420 million – down 31%.

CEO Michael Kaschke highlighted how the diverse nature of the Zeiss business had helped to ride out the semiconductor industry weakness, saying: “What is particularly notable is that our strong portfolio has enabled us to successfully offset the cyclical downturn in the revenue of the Semiconductor Manufacturing Technology business group. This would not have been possible just a few years ago.”

Overall, Kaschke declared 2011/12 as a “very successful fiscal year” for the company, with the final sales figure slightly higher than initial forecasts made a year ago – despite the macroeconomic gloom.

“The economic environment is currently marked by a high degree of uncertainty,” said the CEO. “A slowdown in the economy is already evident in some regions. Nevertheless, we look with cautious optimism to the future.”

R&D spending hike
Notably, the company’s investment in research and development has risen sharply. At €390 million, spending in 2011/2012 was up 14% on the prior year, with the company also building four new facilities in Germany, one in Bangalore and another in Dublin, California.

That investment is beginning to pay off. Thanks largely to EUV development, Zeiss employs 22% more people within its semiconductor division than at this point last year – and the company has now delivered its first complete EUV module to key customer ASML.

Twelve percent more people are also now employed within the firm’s industrial metrology division, which reported a 26% increase in sales to €495 million. The microscopy division showed more modest sales growth of 5% to reach €650 million, with materials applications providing the impetus.

Kashke noted that the microscopy division was feeling the impact of the various national spending crises around the world – and the company will focus on emerging economies and industrial materials applications while federal research spending on bioscience remains subdued.

With a total backlog of €4.2 billion already in place, Zeiss is confident of another strong result next year, and the company should begin to see some benefit from its heavy EUV investment as ASML rolls out the technology to chip manufacturers.

“Carl Zeiss is in excellent shape,” Kaschke stressed. “We are continuing to evolve the company and are remaining on track to further investment and growth – regardless of cyclical fluctuations.”