Medical division of the optics giant reports a 19% increase in EBIT in latest fiscal year. 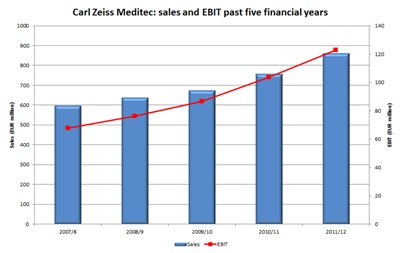 Carl Zeiss Meditec has reported double-digit increases in both sales and earnings for the year ended September 30.

The Germany-headquartered company, which is a global leader in optics-based medical instruments, posted sales of €861.9 million, up nearly 14% on the previous year's total (though only 9.4% after currency fluctuations are accounted for).

And despite the weak global economy, that translated into a strong bottom-line performance, with earnings before interest and taxes increasing at an even faster rate, up 19% on last year to €122.9 million thanks to wider margins. As a result, Meditec is increasing its shareholder dividend to €0.40 per share - up 33% from last year and equivalent to a total payout of €32.5 million.

Innovation pays dividends: literally
In a presentation to investors, CEO Ludwin Monz highlighted the company’s ongoing efforts to innovate. New systems introduced to the market in the past 12 months include the latest “Cirrus” systems, which combine optical coherence tomography (OCT) with fundus imaging on a single platform, and the “Infrared 800” that aids surgeons during transplant procedures.

But it was the “Relex” refractive laser system that Monz chose to highlight in particular – saying that the femtosecond system would establish itself as a new gold standard in the sector and generate recurring revenues for the company for many years to come.

In terms of sales break-out, Carl Zeiss Meditec reported strongest growth in the Asia-Pacific region, where revenues were up nearly 16% year-on-year. The company now has research and development centers in both India and China, with the latter country delivering a 40% increase in sales in the latest financial year.

In terms of sector sales, Meditec’s “microsurgery” division showed the fastest rate of growth (17.8%), and overtook “ophthalmic systems” (up 8.7%) with sales of €378.2 million. “Surgical ophthalmology” sales also grew rapidly, finishing 17.5% up on last year at €107.7 million.

Lonz and his colleagues are understandably bullish with their long-term outlook for the company. While the Western world frets increasingly about the implications of its ageing population, and the spiraling cost of healthcare funding, for Meditec it represents a major market trend in the company’s favor.

By 2050, Monz told investors, more than 30% of the population of industrialized countries will be aged 60 or over – with the incidence of cataracts, glaucoma, age-related macular degeneration and cancers all set to follow the upwards trend.

Meditec’s systems are used in all the key stages of treatment – diagnosis, surgery and follow-up procedures – putting the company in pole position to benefit from the demographic development.

• Parent company Zeiss will release its own full-year financial results for 2011/2012 on December 13.