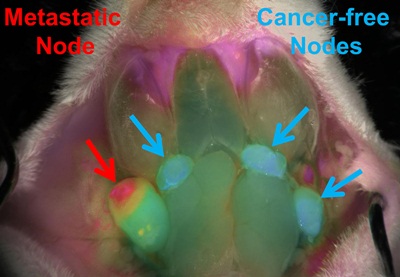 Avelas Biosciences, a start-up company developing a fluorescence technique designed to spot the spread of cancer, has been boosted with $7.65 million in venture finance.

The San Diego, California, company, backed by Avalon Ventures, is developing an approach that shows the spread of cancer to lymph nodes in breast cancer patients. Currently, surgeons often remove those nodes during surgery to treat primary tumors. The excised tissue is then sent to pathologists to check for metastasis, or spread, of the cancer.

If the cancer has spread, then additional lymph nodes may be removed – incurring the risks and additional costs of a second operation, while side effects include numbness and swelling around the armpit area of the patient.

Avelas is working on a technology for real-time imaging of the metastatic tissue, meaning that any lymph nodes showing signs of a spreading cancer could be removed during the initial surgery.

"The medical community is under immense pressure to reduce costs and improve patient outcomes," said Jay Lichter, the Avelas CEO, in a statement announcing the funding deal. "With high surgical procedure costs and operating rooms costs coming in [at] over $60 per minute, it is clear that advances that reduce a patient's time in the operating room are needed.”

Cancer illuminator
Lichter says that the imaging technique, dubbed the “Avelas Cancer Illuminator”, has the potential to speed up the procedure for breast cancer surgery and reduce the number of times a patient is required to return to surgery.

The photonics-based technology builds on the work that won Roger Tsien a share of the Nobel Prize in Chemistry in 2008. Tsien, based at the University of California, San Diego, and now an advisor to Avelas, was a key figure in the development of green fluorescent protein, used widely by life scientists as a biomarker material to allow optical probing of different molecules.

Avelas says that its technology is able to highlight to surgeons the increased activity of enzymes called proteases that occur in tumors and metastases. “The fluorescent peptide changes color in the presence of pathological protease activity, thereby marking the cancerous tissue,” explains the firm.

When used in conjunction with a fluorescence imaging camera system during surgery, a color-coded image showing cancerous tissue can be superimposed onto the normal surgical view, effectively providing the surgeon with a “map” of the cancer’s location.

In a paper published in the Proceedings of the National Academy of Sciences (PNAS) two years ago, Tsien and colleagues reported that animals whose tumors had been resected using the fluorescence imaging technique had shown better long-term survival than those resected using standard bright-field illumination.

In that work, the team used a “Lumar” fluorescent dissecting microscope provided by the medical imaging giant Zeiss, as well as an OV100 small-animal imaging system from Olympus.

“By enabling real-time visualization of lymph node metastases and, potentially, the primary tumor, in breast cancer, [the illuminator] has the potential to significantly improve surgical staging and decrease cancer-positive margins, the presence of which leads to reoperations,” stated the company.

Avelas is also working on a similar nerve “illuminator” imaging system. Using a proprietary fluorescent peptide it can selectively highlight small yet vital peripheral nerves that are difficult to see in complex surgeries, and which can be injured inadvertently.