Asia-Pacific sales have helped to offset impact of “constrained” scientific budgets in the West, says the imaging sensor specialist.

CCD and CMOS sensor manufacturer Andor Technology has posted a steady increase in both sales and pre-tax profits in its preliminary financial results.

While the company was affected by reduced scientific spending in Europe and the US for the year ending September 30, rapid growth in the Asia-Pacific region made up for the shortfall, with the company reporting total sales of £58.3 million – up 2% on last year's figure.

Adjusted pre-tax profits of £10 million were up 3% on last year and, as a result, Andor is set to pay shareholders an inaugural dividend of 2p per share, as the company had initially announced in October.

Colin Walsh, Andor’s chairman, said in the Belfast, Northern Ireland, firm’s results statement: “Despite the uncertain economic environment, we have worked hard to achieve growth in revenue and profit. We have invested in both product development and manufacturing capacity and our products remain clear market leaders in their respective fields.”

“In technology businesses maintaining the flow of new and leading-edge products, structuring the organization for growth and optimising the deployment of resources throughout the year are each important to deliver sustainable future growth and on all of these fronts we have made good progress,” he added.

“The launch of our new sCMOS-based Zyla camera is expanding our penetration into mid-range camera applications and our latest EMCCD camera, the iXon Ultra, has consolidated our position as the supplier of choice to the global research community.”

Walsh said that with the upgrade of Andor’s state-of-the-art development and production facility in Belfast completed, the company now had the capacity to comfortably scale up its output over the coming years ahead.

New board members
Andor has also appointed two new board members, including finance director Alan Lilley and – as previously announced - a new global sales director in the form of Mary Duseau, who until recently was the global VP of sales and marketing at Perkin-Elmer’s Bio-discovery division.

The appointment of Duseau followed a strategic review of Andor’s sales activity, which will now be based around the four key market segments of research, systems, OEMs and software – rather than the previous geographical segmentation.

In support of that new structure, Andor has appointed a head of sales for each of the four new segments. Two of these positions have been filled by former Andor sales directors, with another from the acquired Bitplane business, plus an external recruit and a former director of product marketing at Olympus US.

Aislinn Rice, who had headed up Andor’s “rest of the world” sales region since she joined the firm in 2004, will initially run the new global research division, but will be leaving Andor altogether in March next year.

APAC pushes up research sales
Andor’s results confirmed expectations that had been adjusted downwards earlier in the year when two key OEM customers pushed back their orders – something that precipitated a 34% overnight crash in Andor’s stock price.

Overall, sales to research customers grew by 7% on last year to reach £33.3 million. That was largely driven by the Asia-Pacific region, where more than 70% of Andor’s sales are made directly to research customers. Sales to China jumped 86% to £5.8 million – largely thanks to a one-off OEM order – while Japanese business increased 6% year-on-year. In contrast, research sales to both the EMEA and Americas regions declined 4%.

With the ongoing problems in European economies and the uncertainty surrounding US federal spending, Andor says that it does not yet see any significant change in market conditions, and gave no specific guidance on sales expectations for 2013. But the company is maintaining an upbeat tone, saying:

“We do believe [that] we remain positioned to deliver growth in the year ahead through our investment in sales infrastructure, together with new market-leading products such as the Zyla, and the Revolution WD, to deliver sales growth.” 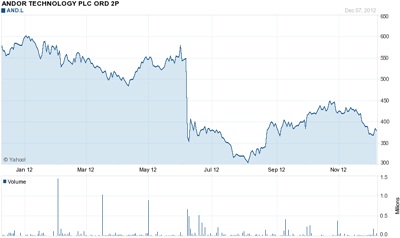 With the company now holding a cash balance of £18.4 million, further expansion via acquisitions remains a possibility. “We will increase our efforts to find value-adding acquisition opportunities that align with our strategic objectives and experience,” the firm said.

• Andor Technology’s stock price rose by close to 5% to 398p in early trading on the London Stock Exchange following the December 10 results announcement, though the company remains valued well below levels seen earlier this year, when it reached a high of 603p in January.