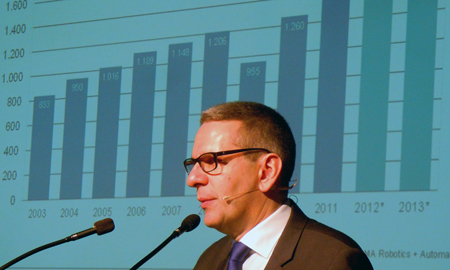 Early on the opening day of Vision 2012, the German Engineering Federation – the VDMA (Verband Deutscher Maschinen- und Anlagenbau) presented the results of its latest survey of the machine vision marketplace. Based on factory order book information and a database of this sector’s performance over many years, the headlines of both review and forecast were positive for Germany and the rest of the world.

Presenter Patrick Schwarzkopf, who has at least three relevant job titles including Deputy Managing Director of the VDMA’s Robotics+Automation Association, Director of its Machine Vision Group, as well as General Secretary of the European Factory Automation Committee (EFAC), was in the chair.

Firstly he reviewed the past decade’s business performance of the German machine vision industry between 2003 and 2013 achieved within Germany and all over the world. “Development in this sector was very fast growing and we have achieved an average 8.5% CAGR over these years.”

“Looking further back and the growth rate was about 12%,” he added, “because the first few years were very dynamic, but then we had the crisis year of 2009. But since then the recovery has been very fast. Just a year later that was compensated for, with 2010 seeing a positive growth of 32%. In 2011 the VDMA’s forecast was 20% growth and the [German] industry achieved exactly that figure.”

Germany’s total machine vision industry turned over €1.5 billion annually, in the past few years which is expected to continue and to be improved on in the coming years. Schwarzkopf commented, “What we have also seen has been a record number of employees hired by the MV industries. In 2011 the industry here increased staffing by 12% and that is a huge jump in one year.”

He moved on to consider the global machine vision markets in 2011, by rates and absolute sales. Germany grew by 21% to almost €400m; the rest of Europe by 9% to just under €200m; Asia by 28% to around €150m, and the Americas by 35% to €110m. Schwarzkopf commented on the high rate of growth and relatively low volume in North and South America: “You can also see that in the US and Latin America especially that there is still a lot of need to automate, and a need to invest in manufacturing so we think there is a very good market opportunity in the Americas.”

”The turnover realized by vision systems is much higher than that of the compact systems, like intelligent cameras. In previous years we have seen huge growth by compact systems but still the with a small base. These have been growing fast but the volumes are still not very big, compared to the more complex systems.

“Cameras made by the German MV industry have been very successful in recent years, and they now account for a huge amount of business. Then you have other devices such as optics, lighting, framegrabbers, vision software, interfaces, cables and accessories, which all have relatively lower shares. Considering the rate of change in demand for these sectors, it is clear that complex vision systems sales grew by >30% in the past years, but in 2011 sales of compact systems for the first time grew less fast – while the PC-based, complex systems, which in recent years have had very little or no growth, have come up strongly again.”

According to the VDMA survey, there is a positive outlook in the coming years for the machine vision technology sector. Increasing standardization, simpler practicality, greater efficiency and miniaturization are proving to be real growth drivers.

Schwarzkopf commented, “Increasing ease of use of machine vision systems is also based on human machine interfaces, which are getting more intuitive – the specialized knowledge required for programming very often is not necessary any more.

"Users can now configure a solution relatively simply. And another positive factor is that we are seeing increasing performance of MV systems for their cost – with higher and higher performance each year of MV systems; furthermore there is a general a trend for miniaturization and very often the products that need to be inspected are nowadays too small for human vision.” 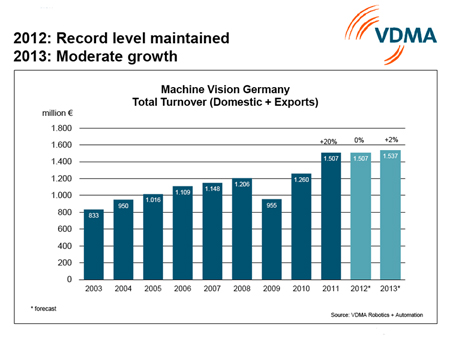 Rise of the robots: a good indicator for the prospects of the MV sector.

There is also a trend for embedded vision, where machine is becoming a part of many kinds of machinery and devices such as in robots, consoles or in mobile phones, which are also market drivers. There are new application areas, such as agriculture where vision systems are used to distinguish between crops and weeds to minimize the use of herbicides.

“I have received some data from the International Federation of Robotics, which basically counts every robot that is manufactured and shipped,” Schwarzkopf continued. “The IFR says that the operational stock of robots used internationally is will continue to grow in the coming years by 8% in the medium term – and by 10% in 2012 alone. Increasingly, robots are developed in conjunction with a vision system; robots are learning to see; and the level of robot use is a good indicator for the prospects of the MV sector as well.”

“Overall we have a very high level of MV growth at the moment and we are sure that we can maintain that. However I must note that demand for MV solutions from abroad is currently stronger than domestic demand within Germany.

“Moving on to the VDMA forecast, we do believe that in Germany we can keep the high level of €1.5 billion turnover in 2012 and furthermore that in 2013 there is the possibility of moderate growth on top of that. If we can assume that the euro crisis will be solved and that no major tremor comes up then I think we can expect to see this high level of business to be kept and even slightly increased in the coming years.”