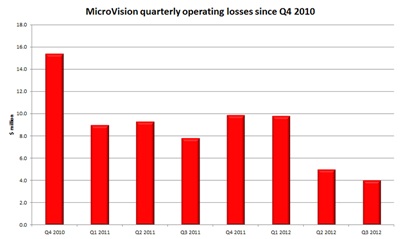 MicroVision, the US-based developer of laser pico-projectors, has posted an increase in sales and reduced cash burn for its third fiscal quarter of 2012, though the company continues to mount up losses.

Thanks to a supply deal with the Japanese electronics giant Pioneer valued at $5.8 million in total, sales rose to $2.6 million in the latest quarter, up from $1.3 million in the second quarter.

Pioneer is using MicroVision’s technology in its “Cyber Navi” range of head-up displays for drivers, and shipments relating to the current deal will be completed over the next two quarters.

Meanwhile, MicroVision’s losses continue to mount. Despite the Pioneer business, a lower-cost licensing model and improved profit margins thanks to the growing availability of direct-emitting green laser diodes (DGLs), the Redmond, Washington, firm still made an operating loss of $4 million in the latest quarter.

That is a big improvement on previous results – the company has racked up total losses of close to $100 million since the start of fiscal 2010 – but with just $10.8 million in cash on its balance sheet, MicroVision currently only has enough money to operate through the second quarter of 2013.

By then the company is hopeful that its customer base will have expanded. Discussions with top-tier smart phone OEMs looking to incorporate the projector technology into their products are said to be ongoing, while the emergence of a second volume supplier of DGLs in the form of Germany’s Osram Opto Semiconductors should help to make pricing of the key components more competitive.

Laser “barrier” mitigated
Osram OS joins Japan’s Nichia as one of only two volume suppliers right now, although MicroVision CEO Alexander Tokman expects Sony, which is working closely with Sumitomo Electric Industries on an improved “semi-polar” design featuring gallium nitride substrate material, to release a commercial version “within twelve months”. The Californian start-up Soraa has also sampled “GaN-on-GaN” DGLs in the past, although it now appears much more focused on the solid-state lighting market.

Tokman said that more than 20 potential customers had been evaluating the company’s pico-projector technology in the third quarter. However, turning those evaluations into firm orders typically takes between 12 and 18 months – suggesting that MicroVision will need to raise more cash before long.

The company could also benefit from an expanded Pioneer deal, should the electronics firm decide to launch its Cyber Navi product – currently only available in Japan – elsewhere. Referring to recent press reports, Tokman indicated that a European launch might be possible.

The CEO stressed that while potential customers had in the past been put off by the limited supply and high cost of DGLs, those concerns were now much less of a problem.

“Hopefully now the barrier has been greatly, greatly mitigated,” Tokman told an investor conference call to discuss the third-quarter results. “The tier-one OEMs can validate this themselves…we believe [the DGL] becomes a non-issue, and as a result we are seeing an increased interest in our technology for a variety of licensing models.”