A structure built from thousands of polymer nanolayers produces a gradient of refractive responses within a single lens. 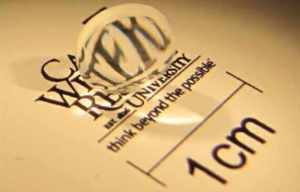 The natural way: a GRIN lens

A new design of artificial lens intended to demonstrate refractive properties similar to those inherently shown by many natural lenses been developed by a US team of researchers.

"The human eye has a GRIN lens," said team member Michael Ponting of PolymerPlus, a spin-out from Ohio's Case Western Reserve University that develops multi-layered materials and gradient refractive index technology for civil and military clients. "As light passes from the front of the human eye lens to the back, light rays are refracted by varying degrees. It’s a very efficient means of controlling the pathway of light without relying on complicated optics, and one that we attempted to mimic."

The team built its artificial lens from layers of transparent coextruded polymer film, each containing in turn nearly 5,000 alternating layers of polymethyl methacrylate (PMMA) and a polystyrene acrylonitrile blend (SAN17), and each with a specified refractive index determined by the ratio of its constituents. Each layer of film was around 50 microns thick.

These were then stacked into sheets from which lens preforms were thermoformed and diamond-turned, to create aspheric anterior and posterior GRIN lenses that could be assembled into a lens similar to that in the human eye. The target was to create tailored refractive index performance ranging from 1.49 to 1.54, roughly modeling a human eye at five years of age.

The resulting lens produced images described as "clear and sharp, confirming the focusing ability of the singlet bio-inspired human eye lens," according to Ponting and the team.

DARPA development
Lenses possessing a built-in distribution of refractive index could be of value in several applications, including those where large, heavy and complex optical assemblies currently carry high manufacturing cost.

The technology has caught the attention of DARPA, which in 2010 instigated the Manufacturable Gradient Index Optics program or M-GRIN, to advance GRIN design and fabrication technology. DARPA's announced goal is to demonstrate manufacturing feasibility of GRIN-based optical assemblies for both a high-performance color camera lens and a two-color solar concentrator.

M-GRIN entered its second phase earlier in 2012. Included in its current scope are grants to Oregon's Voxtel for work on ink jet printed gradient index optics; and to a group including Surmet and the University of Rochester for development of lenses manufactured from aluminum oxynitride ceramic.

In the meantime, Ponting believes that the polymeric structure manufactured from PMMA and SAN17 is a valuable proof-of-concept.

"Though a first generation design, this technology enables many potential advances toward fabrication of more compact optical systems similar to one or two lens biological systems," commented the team in the published paper. "Other opportunities to apply this technology include lightweight, miniaturized imaging or surveillance systems, conventional glasses, contacts, or potentially customizable gradient refractive index distribution lens implants."