Research in Innsbruck suggests surplus heat can be recycled to power a quantum cascade laser. 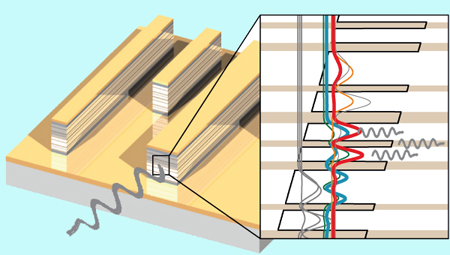 In many conventional microelectronics processes, heat often causes problems and engineers have to put a lot of technical effort into cooling devices such as micro-chips, to dissipate the surplus energy that could otherwise damage or reduce the performance efficiency of the device.

Now physicists in Innsbruck, Austria, have proposed a concept for a laser powered by such heat that would otherwise be wasted. The team based at the Institute for Theoretical Physics, University of Innsbruck, say the idea also promises a completely new way to usefully cool overheated microchips.

Since its invention 50 years ago, lasers of varying wavelengths and power are nowadays used in many aspects of domestic, commercial and industrial life. However, not all transmission wavelengths have been equally well researched. For the far infrared and terahertz regime, quantum cascade lasers are the most important source of coherent radiation.

Light amplification in such a cascade laser is achieved through a repeated pattern of specifically designed semi-conductor layers of diverse doping through which electric current is running, which can cause significant undesirable heating.

Helmut Ritsch, at the Institute for Theoretical Physics, at the University of Innsbruck, comments, “In quantum cascade lasers, electrons are transferred through this structure in a specific series of tunneling processes and quantum leaps, emitting coherent light particles.

”Between these layers the electrons collide with other particles, which causing heating in the laser. Thus, quantum cascade lasers only work as long as they are strongly cooled. When too much heat is produced, the laser light is extinguished.” 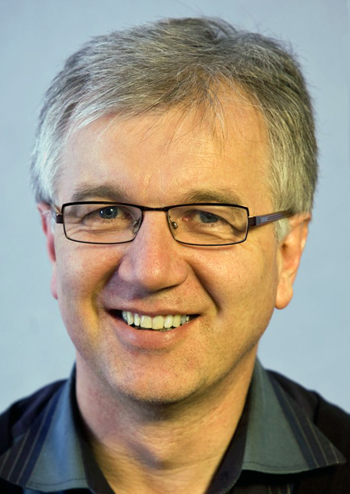 Helmut Ritsch: “If we are successful, it will be a real technological innovation.”

When looking for ways to reduce heat in lasers, PhD student Kathrin Sandner and Ritsch together came up with a revolutionary idea: use the surplus heat to power the laser. In the theoretical physicists’ work, recently published in Physical Review Letters, the two physicists propose the theory that the heating effect in quantum cascade lasers could not only be avoided but, in fact, be reversed through a modification of the thickness of the semiconductor layers.

“A crucial part is to spatially separate the cold and warm areas in the laser,” explains Sandner. “In such a temperature gradient-driven laser, electrons are thermally excited in the warm area and then tunnel into the cooler area where photons are emitted.” This process produces a circuit where light particles are emitted while heat is absorbed from the system simultaneously.

“Between the consecutive emissions of light particles a phonon is absorbed and the laser is cooled. When we develop this idea further, we see that the presence of phonons may be sufficient to provide the energy for laser amplification. Such a laser could be powered without requiring an electric current.”

Ritsch adds, “It is a challenge, but if we are successful, it will be a real technological innovation.” The physical principle behind the idea could already be applied to existing quantum cascade lasers, for which it could provide internal cooling. This simplified concept seems to be technically feasible and is already being examined by experimental physicists.

“Apart from the conceptual elegance of this idea, a completely new way may open up of using heat in microchips in a beneficial way instead of having to dissipate it by cooling.”

Sandner majored in physics in Freiburg, Germany, and has worked as a researcher at the Institute for Theoretical Physics, University of Innsbruck, since 2009. Her work has been supported by the DOC-fFORTE doctoral program of the Austrian Academy of Sciences and by a PhD grant from the University of Innsbruck. She is about to finish her PhD program.