Decoding the speckle pattern produced by an opaque scattering layer allows the object hiding behind to be imaged. 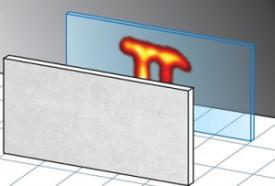 A team from University of Twente and the University of Florence has successfully imaged a fluorescent object that was hidden behind a thin opaque screen, and done so without the need for either a detector or a light source to be present on the object's side of the barrier.

Although significant further work will be needed to develop the process into one able to visualize non-fluorescent objects or see through screens of substantial thickness, the researchers believe that their approach could ultimately be an attractive way to carry out imaging in fields such as cell studies or other applications. The work was published in Nature.

The breakthrough exploits the fact that, although light from an object is scattered by an opaque screen preventing a direct view, the scrambled signal still contains information about the object. What's needed is a means to decode the information and reconstruct an image.

Led by Allard Mosk of the University of Twente, the researchers manufactured a small fluorescent object 50 microns wide, and placed it 6 mm behind a ground-glass diffuser acting as the scattering layer. From the viewing side, the result is as expected: a diffuse light pattern, not recognizable as the object behind the screen.

Illuminating the opaque layer from the viewing side with a 532 nm laser did not directly help to reveal what lay behind the screen, but a certain amount of that illumination did pass through the screen in speckled form, and reach the object beyond.

"The transmitted light produces a speckle pattern that illuminates the object," explained Mosk and colleagues in the published paper. As a result, the diffuse image seen from the viewing side is now influenced by the additional speckle illumination: "The total transmitted fluorescence from the object can be measured, and retains the information on the overlap between the object's fluorescent response and the speckle intensity," said Mosk.

Moving the illuminating laser through very small angles of incidence kept the speckle pattern dimensionally consistent, effectively providing a means to scan the pattern across the hidden object.

Another step involved repeating the experiment multiple times, to produce statistical averages of the scattering ability of the screen which could then be accounted for.

Algorithms were then set to work on the resulting data, reconstructing the object behind the screen by guessing missing signal information and then refining that guess. The eventual end result was an accurate rendering of the 50 micron target.

The team subsequently tried the technique on a larger subject, a slice of stem from a Lilly of the Valley plant, which happens to demonstrate intracellular autofluorescence. They found that in the reconstructed picture "all the high-intensity features of the object were faithfully recovered," as Mosk noted.

Future developments could involve applying the method to other optical signals that depend on speckle intensity, such as chemically selective Raman scattering or photoacoustic absorption. Scanning the speckle pattern in three dimensions, by adding a parabolic phase pattern to the beam, may allow 3D imaging of cell morphology.

Other fields could also benefit. "This will be very useful in nanotechnology," said Mosk. "We would like to bring structures to light that are hidden inside complex environments like computer chips, and extend the method to examine objects under the human skin. But for the moment, our method is too slow for that."