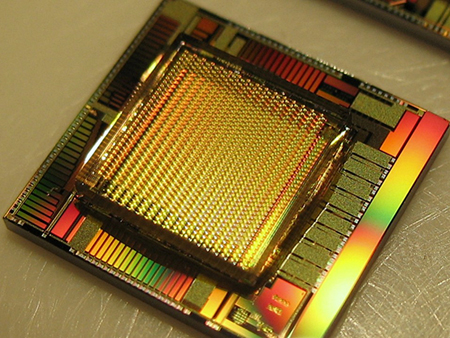 When it is necessary to perform imaging in very low light situations then every single photon counts. This is the point at which conventional technologies can often reach their performance limit.

But researchers from a pan-European low-light recording project and from the Fraunhofer Institute for Microelectronic Circuits and Systems IMS in Duisburg have now developed a diode that can read photons faster than ever before.

Fast and ultrasensitive optical systems are gaining increasing importance and are now being used in a wide range of applications, such as in imaging procedures in medicine and biology, in astronomy and in safety engineering for the automotive industry.

Frequently the challenge lies in being able to record high-quality images under extremely low light conditions. Modern photo detectors for image capture typically work with light-sensitive electronic components based on complementary metal oxide semiconductors (CMOS) or charge-coupled device-based image sensors. The limiting problem is that neither the latest CMOS or CCD systems can simultaneously ensure a rapid and yet highly-sensitive high quality image recording if there are too few photons to read.

In cooperation with the international MiSPiA project consortium, the Fraunhofer Institute for Microelectronic Circuits and Systems IMS in Duisburg has now advanced the development of CMOS technology and introduced an ultrasensitive image sensor with this technology, based on Single Photon Avalanche Photodiodes (SPAD).

Its pixel structure can count individual photons within a few picoseconds, and is therefore a thousand times faster than comparable models. Since each individual photon is taken into consideration camera images are also possible with extremely weak light sources.

In order to count these events, each of the sensor’s pixels comes with very precise digital counters. At the same time, the scientists have applied microlenses to each sensor chip, which focus the incoming beam in each pixel onto the photoactive surface. Another advantage is that processing the digital image signals is already possible directly on the microchip; therefore, additional analogue signal processing is no longer needed.

Dr. Daniel Durini, group manager for optical components at the Fraunhofer Institute IMS, explains, “The image sensor is a major step toward digital image generation and image processing. It allows us to have the capability to use even very weak light sources for photography. The new technology installs the camera directly on the semiconductor, and is capable of turning the information from the light into images at a significantly faster pace.”

The Fraunhofer IMS engineered the sensor under the European research project MiSPiA (Microelectronic Single-Photon 3D Imaging Arrays for low-light high-speed Safety and Security Applications). Altogether, seven partners throughout Europe from the fields of research and business are involved in the project.

In the next developmental phase, the scientists from Duisburg are working on a process to produce sensors that are backlit, and therefore expected to be even more powerful. At the same time, the new technology is already being utilized in tests for traffic applications. Chip-based mini-cameras could protect vehicles, bicycles and pedestrians from collisions and accidents, or perhaps assist in the reliable functioning of safety belts and airbags.