As UDC loses a third of its stock value, a new report from analyst DisplaySearch suggests that only a handful of OLED TVs will be shipped this year. 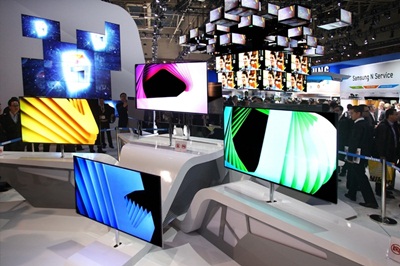 Nearly one-third of the stock value of New Jersey-based UDC was lost after the company said that it now expected to post sales of around $81 million for the year. It had previously suggested that the figure would be between $90 million and $110 million.

Speaking to investors to discuss the company’s disappointing third-quarter financial results, CEO Steve Abramson highlighted a recent report from the market analyst company DisplaySearch suggesting that only 500 OLED TVs would now ship in 2012 – compared with previous expectations of 50,000 units.

Earlier this week, DisplaySearch analyst David Hsieh said: “If we do see OLED TVs hit the market within 2012, the shipments will be used primarily for retail demonstrations in developed regions like North America and Europe.” He added, “4K x 2K LCD TVs have has become a focus and are currently available, and OLED TV needs to demonstrate its technical superiority.” 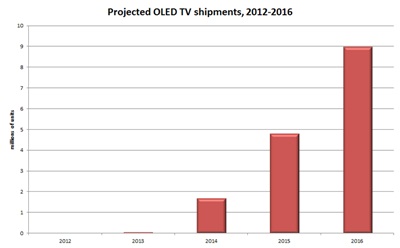 Production ramp in 2014
Expectations were raised at the start of 2012 when both LG and Samsung, the market leaders in active-matrix OLED display production for mobile handsets, hinted that they would launch TVs based on the technology by year-end.

Although the retail demonstration models may still appear in time for the holiday period, LG is now expected to launch its first 55-inch OLED TVs commercially in early 2013, while 2014 is shaping up to be the key year as far as a production ramp is concerned.

Once the ramp does kick in, it should prompt a huge expansion of the OLED market – and therefore UDC’s business. DisplaySearch’s Hsieh predicts that 50,000 OLED TVs will ship in in 2013, but that this will rise to 9 million units in 2016 as electronics firms in Japan, Taiwan and China follow in the footsteps of Korea’s LG and Samsung. That figure would represent around a 3% penetration of the TV market.

With OLED TVs also needing to demonstrate superior performance to much-improved LCD TV offerings, the analyst has identified a number of technical and market challenges that must still be overcome.

One of those is their high cost – the 55-inch OLED TVs are expected to debut at around $10,000, the kind of price only early adopters would be willing to pay. Prices will inevitably fall as production increases, but another factor is the low yield of the pilot Gen 8 OLED manufacturing lines currently in existence.

Only two such lines exist right now, and Abramson says that although LG Display is reported to have started constructing a mass-production line capable of making 180,000 55-inch OLED TVs per month, it will not become fully operational until the first quarter of 2014. 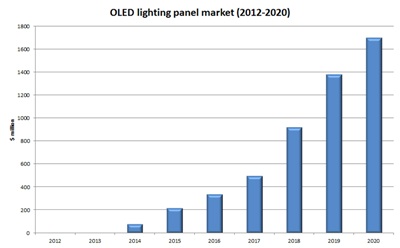 OLED lighting “needs a spark”
While manufacturing yields will take time to improve, that ramp will be the key to expanding the OLED display market, which DisplaySearch expects to be worth some $34 billion by the end of the decade (from around $6 billion currently).

Looking to the longer-term opportunity of OLED-based white lighting, Abramson said that in the latest quarter UDC was engaged with no fewer than a dozen companies working on the technology.

But the CEO also stressed that this emerging sector remains at a very early stage of development, and the technology is still vastly more expensive than conventional or LED lighting.

In its latest market forecast, the French analyst company Yole Développement said that OLED technology will “have to find a spark” and be able to combine sufficient niche applications to deliver the economies of scale required to push costs down to a sensible level for consumers.

Yole’s Pars Mukish believes that the market for OLED lighting panels, worth just $2.8 million this year, will soon benefit greatly from the better process control and larger substrates that are becoming available as the likes of Samsung and LG ramp their OLED TV production.

Expecting 2014 to be the “trigger” year for this, Mukish predicts that the market for OLED lighting panels will top $200 million by 2015, and reach approximately $1.7 billion by the end of the decade.

However, that will still represent only 5% of the $34 billion predicted by DisplaySearch for the OLED display market by the same time, and the Yole analyst team stresses that traditional lighting companies will be reluctant to adopt a new technology that could eat away further at profit margins that are already under pressure as the industry undergoes a transformation to solid-state lighting.

Although UDC’s stock price was hit hard by its Q3 revenue miss and weaker 2012 guidance, it is clear that investors still see the vast potential for its OLED materials technology to generate future sales for the company - despite posting a net loss of $5.5 million on revenues of just $12 million, UDC remains valued at close to $1 billion.