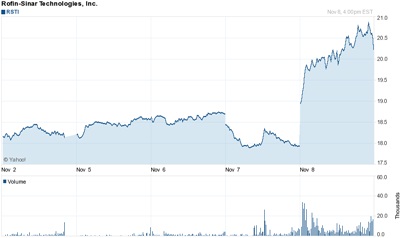 Shares in the industrial laser company Rofin-Sinar jumped by 10% after the company revealed sales of $147.5 million for the final quarter of its fiscal year 2012.

That figure was much higher than the forecast range of between $125 million and $130 million, although it did also represent a 13% decline on sales in the same period last year.

The strong finish to the current fiscal year meant that Rofin was able to post annual sales of $540.1 million. That is 10% lower than the $597.8 million recorded in fiscal 2011, but the company pointed out that the reduction was in part due to currency fluctuations.

CEO Günther Braun said that the Q4 figures were boosted by sales of lasers for microelectronics and marking applications, describing “excellent demand” from the consumer electronics and medical device sectors.

As a result, Rofin sold 855 lasers for micro and marking applications in the quarter, up from 825 during the same period last year. But unit sales of higher-power lasers for “macro” applications fell from 600 in the final quarter of fiscal 2011 to only 438 in the latest quarter – reflecting lower demand from the machine tool industry in China.

New high-power fiber laser target
Braun again highlighted the growing trend towards the use of high-power fiber lasers. The CEO observed that at the recent EuroBlech sheet-metal cutting exhibition in Hanover, no fewer than 26 of the 36 laser cutting systems on display featured fiber sources.

Rofin missed Braun’s original target to sell $80 million worth of fiber lasers in fiscal 2012, partly because of price pressures but also due to delays in developing new lower-cost laser diode pump modules that are seen as crucial for competing in the market and delivering suitable profit margins.

The company did ship 752 fiber lasers (with sales totaling $56.5 million) during the fiscal year just completed, but most of those were lower-power products used in micro and marking applications. Now Braun has set a new target, and is aiming to sell 300 high-power (kilowatt-class) fiber lasers during fiscal 2013 – including those to be used in directed-energy weapons development, where subsidiary Nufern is working closely with the US military.

Auto slowdown?
Braun also warned of an impending slowdown in the automotive sector, a market that has been a strong area for many laser companies over the past couple of years as car manufacturers in North America and Europe have invested in new production technologies that are designed to make lighter vehicles, and which are suitable for high-strength steels.

In the closing quarter of fiscal 2012, revenues from automotive applications represented 8% of Rofin's sales. However, Braun warned: “The automotive industry maintained a solid level, [but] we believe that it’s on the decline. The European debt crisis should affect consumer spending, especially in the automotive industry where demand for smaller cars weakened.”

That feeling is backed up by a recent report from the Brussels-based Federation of European Automobile Manufacturers (ACEA), which said that the number of new registrations in the European Union has declined nearly 8% in the first nine months of 2012 (versus 2011), and by nearly 11% in September.

The same ACEA report points out that Germany’s premium car makers have compensated for the European weakness with strong exports to Russia, the US and China, however.

With the semiconductor and solar capital equipment markets both very weak at the moment, the prognosis is for a challenging start to the company’s new fiscal year.

“The continuing uncertainty regarding the global economy and the more cautious sentiment of our industrial customers, mainly in the automotive, semiconductor, electronic and machine tool industries, are reflected in our outlook,” Braun added, before forecasting that sales revenues in the current quarter would be in the range of $130 million to $135 million.

For fiscal year 2013, Rofin predicts that sales will remain flat with 2012, coming in somewhere between $535 million and $545 million - with an anticipated improvement in the second half.