Carl Zeiss, Philips and Samsung Ventures to be among guests at the Bordeaux convention. 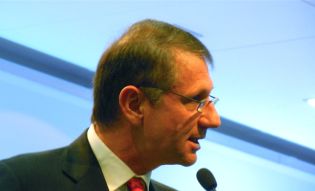 Invest in Photonics, the business partnering convention held in Bordeaux, France, has announced the names of three key speakers for the December 12th - 13th 2012 event.

These key speakers will each kick-off a session focused on a particular market important to the photonics industry and capable of fast growth: cleantech; healthcare; and consumer goods. All sessions will conclude with a round-table.

"Speakers at Invest in Photonics 2012 will agree that this technology underpins the value chain in so many markets," said Giorgio Anania, chairman of Invest in Photonics 2012. "We are very pleased that global brands Zeiss, Philips and Samsung Ventures will take a lead role in this year’s program. These players at the top end of the value chain will give the event an even bigger business-focus."

The discussion on healthcare will debate the future of several technologies, including a presentation titled "Trends in photonics in cataract and refractive surgery. Disruptive or up-market strategies?” Other speakers in this strand will include representatives from Merieux Developpement, Amplitude Systemes, nLIGHT and Adam Capital Management.

The conference on cleantech will focus on growing market sectors such as smart lighting, and include speakers from First Solar and Sofinnova Partners.

The consumer goods conference will feature speakers from companies including Eolite, Intune, ESI and SPI Lasers, who will make presentations on growth opportunities in various consumer and professional markets.

A fourth session dealing with competitive developments and trends in Asia will be led by Aloe Private Equity founder Vivek Tandon. Aloe Private Equity specializes in injecting capital into companies with environmentally sustainable technology and establishes strategic partnerships with companies based in India, China and other ASEAN countries.

Also present will be a selection of early-stage companies seeking seed funding, development money and later stage financing. Invest in Photonics provides an opportunity for these innovative European companies to network directly with potential sources of funds, presenting elevator pitches of their projects and their intended routes to achieving critical mass.

According to the organizers, the previous Invest in Photonics conventions have helped raise EUR 37 million in funding. Three hundred people are expected to attend the 2012 event, which would be more than double the number of delegates present in 2010, and the event will also broaden the type and number of companies potentially selected to receive funding.

To accommodate the expansion, the conference venue has moved to Bordeaux's Place de la Bourse, adjacent to the Garonne river.

"To enable investors to better evaluate and select investments in the photonics industry, we’ll be giving them a clear picture of the five- and ten-year perspective," said Anania. "For SMEs looking for capital to fund growth and development, we will be creating a special venue to connect and network with investors. Invest in Photonics is a great opportunity for attendees to strike deals. It is the only high-level investor partnering conference of its kind for the photonics industry."