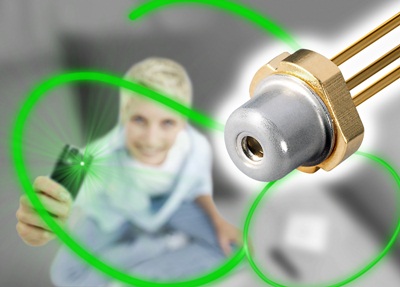 In a development that will be welcomed by those awaiting the advent of high-brightness pico-projectors, Germany’s Osram Opto Semiconductors (Osram OS) has launched its first diode lasers to emit directly in the green region of the spectrum.

The lack of compact green emitters has long represented a major gap in the armory of semiconductor laser manufacturers – so much so that the phenomenon even has its own name: the “green gap”.

Until recently, this has meant that most compact green lasers are in fact infrared devices, combined with frequency-doubling crystal optics. As well as being bulkier than their red- and blue-emitting equivalents, this adds optical complexity and reduces electrical efficiency – a particularly important consideration if pico-projectors are to be incorporated into products such as smart phones or tablets. As a result, most existing pico-projectors are based on LEDs rather than lasers, offer a much lower brightness and can only really be used in dark rooms.

Now Osram’s LED and laser diode making subsidiary has released two devices, one emitting at 50 mW with a peak wavelength of 520 nm, the other 30 mW at 515 nm. The lasers, which the company says have been optimized for cost and mass production, are set for a volume ramp before the end of 2012.

Adding competition
The Regensburg-based firm is not the first to launch direct green diode emitters, but the commercial availability of its devices will add to the degree of competition in the field. Japan’s Nichia, which has pioneered the development of blue diodes based on similar semiconductor materials for two decades, currently sells a 515 nm laser with a maximum output of 100 mW, for example.

In addition, Sony – whose requirement for blue lasers to be used in Blu-ray Disc products and the PlayStation3 games console was critical to the refinement of indium gallium nitride (InGaN) laser diode mass production – said in June 2012 that it had developed a 100 mW, 530 nm device based on the adoption of new semi-polar crystal materials. US start-up Soraa is another potential supplier.

Osram OS highlights that while its lasers may not be as powerful as those of its rivals, the focus on single mode emission provides a key advantage in the form of beam quality and low divergence.

For pico-projectors, that characteristic is very important, because the laser light is typically projected by a MEMS-based mirror and no focusing optics. This means that the resolution of the projected image depends on the laser spot’s quality and divergence.

Stephan Haneder, marketing manager for consumer lasers at the German company, stated that the availability of such devices from another supplier makes the commercial breakthrough for compact laser projectors “closer than ever before”.

Osram OS points out another advantage of direct green emitters, in that they can be modulated directly. “This is an important property for MEMS-based projectors in which the color components per pixel result from the emission time of the laser diode,” the firm explains. “There is also no need to adjust the focus of the projection image. The image is always sharp, even on curved surfaces.”

Here for real
The commercial arrival of the lasers will be welcome news for the likes of US-based MicroVision, which is at the forefront of pico-projector technology development but has struggled financially – partly as a result of delays in the development of direct green emitters, and the high cost of those that are available. The company’s VP of research and development Dale Zimmerman told optics.org last month:

“We believe direct-diode green lasers are finally here for real. We are confident that as volume expands we'll see the pricing of the diodes come down dramatically, along with further improvements in efficiency, and anticipate that red, blue and green direct-diode lasers will be broadly available.”

At the moment, it appears that Sony’s lasers are leading on the efficiency front, thanks to the use of the semi-polar structure. The Japanese electronics giant said in June that the devices developed with Sumitomo offered an electrical efficiency of 8%, ahead of the 5-6% quoted by Osram OS.

Aside from the potential volume uptake in pico-projectors (analysts at Pacific Media Associates predicted earlier this year that this market would grow from 3 million units in 2011 to some 58 million by 2015), Osram OS also anticipates commercial applications in laser light shows.

The company also sees future applications in construction. Although the output power and the electrical efficiency of the green devices is lower than red lasers, the fact that the human eye is much more sensitive to green wavelengths means that for the equivalent power (and therefore the same laser safety class), they could be used to make measurements over much larger distances.

While mass production is expected by year-end, Osram OS added that it was unable to provide a production target at this time “due to the planned IPO” of the wider Osram unit by parent company Siemens – a move that was last year shelved because of macroeconomic concerns.

Osram’s PL515 and PL520 products are currently in preliminary production and can be ordered now. The technology behind the devices was developed in part through the German Ministry for Education and Research (BMBF) funded “MOLAS” project to create new technologies for ultra-compact and mobile laser projection systems.