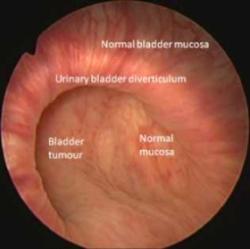 An international team has demonstrated that a confocal Raman spectroscopy (RS) probe could improve the detection of bladder cancer tumors, compared to conventional RS.

The confocal technique boosts the specificity of the diagnostic algorithm, by suppressing the out of focus and non-analyte-specific Raman signals emanating from the neighboring normal tissue that can interfere with the analysis.

"What we have been looking to do is develop an early and reliable diagnosis of urinary bladder cancer," commented Ghulam Nabi. "We believe that RS could provide a quick diagnosis, and our results so far show that it does indeed have potential as a reliable tool."

This potential has been known for some time, based on the inherent ability of RS to identify the different spectral responses of particular cells and structures, both healthy and malign, and hence reduce the rate of false positive results that arise from other diagnosis techniques.

However, at present RS probes "have not reached the expected levels of specificity, thereby impeding their clinical translation," noted the team in the published paper.

The solution was to design a confocal RS probe, suitable for use with samples of bladder tissue, with a sampling depth of less than 300 microns. This relatively limited sampling depth compared to that of normal "high-volume" RS spectroscopy was intended to counteract the effects of interferents and surrounding tissue.

The system was constructed around a conventional RS unit, which was modified so that the light from the proximal end of the collection fibers was focused onto a 150 micron pinhole which acted as the primary confocal aperture. This enabled the depth of field to be modified by changing the pinhole diameter without any change in the design or fabrication of the Raman probe itself. Removing the pinhole altogether returned the system to conventional high-volume RS operation.

A new benchmark
A total of 140 Raman spectra were taken from healthy and suspected cancerous tissues ex vivo. In line with conventional practice, an algorithmic analysis of the spectral data was used to identify the presence of the uncorrelated variables that indicate the likely presence of malignancy. Conventional histopathology examination provided the baseline to assess the success of both confocal and high-volume RS in correctly analyzing the samples.

"The most important diagnostic parameter is sensitivity, because one would like to identify every single lesion in every patient for treatment," noted the team. "Our sensitivity values for both confocal and high-volume Raman probes were 86 percent. However, the clear contrast was in the markedly higher specificity values for the confocal instrument."

An improvement in specificity - in the removal of false positives and the correct identification of healthy subjects - would translate into significant benefits for patients and clinics.

"Based on our empirical depth of field value of 280 microns, one can reasonably infer that we are able to more selectively sample the molecular constituents at the surface tissue layers, in relation to the high-volume Raman probe," explained the researchers. "Further reduction in confocal range is probably desirable, but would come at the cost of reduction of the intrinsically weak Raman signal."

The team now intends to work towards the goal of a diagnostic tool based on multiple optical and spectroscopic modalities, notably confocal RS in tandem with photodynamic diagnosis, an existing technique in which a photosensitising chemical enables tumor tissue to be more easily identified.

Such a hybrid "may establish a new benchmark in terms of both sensitivity and specificity," according to the researchers.