Femtosecond laser systems for ophthalmology feature again in the FDA's list for third quarter of the year. 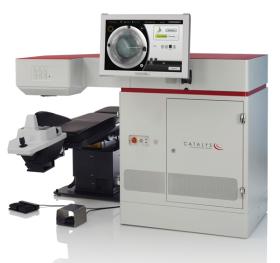 A selection of the photonics-based devices awarded 510(k) clearance by the US Food and Drug Administration during the period July to September 2012, indicating that the regulators have approved the instrument for use in the United States.

Ophthalmology
The adoption of femtosecond-laser-based systems for cataract surgery, long heralded as a route towards safer and more effective treatment of the condition as well as a spur to significant growth in the ophthalmic lasers sector, continues to pick up steam.

Three of the existing femtosecond platforms received additional 510(k) approval for different stages of the cataract procedure during the quarter.

In July 2012 the Victus system developed by Technolas PV received approval for anterior capsulotomy and flap creation, two of the critical surgical steps. Victus is based on technology first developed by 20/10 Perfect Vision, Germany; Technolas PV is now part of Bausch+Lomb.

The Catalys femtosecond platform from California-based OptiMedica was approved in August 2012 for use in the removal of the crystalline lens during cataract replacement. This includes anterior capsulotomy, phacofragmentation, and the creation of single plane and multi-plane incisions in the cornea. Catalys combines femtosecond laser technology with an integrated optical coherence tomography system, to enhance the accuracy and precision of the procedure.

In September 2012 the LenSx platform developed by Alcon received approval for use in the creation of corneal incisions, anterior capsulotomy and laser phacofragmentation. Each of these procedures may be performed either individually or consecutively during the same surgery.

Away from cataract surgery, the Opto Hyalus Green Laser, a Nd:YAG surgical laser system operating at 532 nm and used in the photocoagulation of soft tissue, has been approved for use in retinal treatment. The system is marketed by Opto USA, the Florida-based arm of Brazil's Opto Electronica. Retinal photocoagulation can help correct vascular and structural abnormalities of the retina, including age-related macular degeneration and glaucoma.

General Surgery
The Clinicon SureLase CO2 laser system has been approved for general use in laser surgery procedures. These can include incision, excision, vaporization and cauterization of soft tissue in specialties such as cosmetic surgery, dermatology and oral surgery.

Aesthetic treatments
Lutronic, the California-based US arm of Korea's Lutronic Corporation, has received approval for its Freedom laser system, a Nd:YAG platform intended for use in general and plastic surgery, dermatology, podiatry, urology and other applications.

The Tria laser system developed by Tria Beauty of California employs 800 nm laser irradiation from a semiconductor diode to reduce hair growth, and has been approved for adjunctive use alongside shaving for hair removal.

The Aerolase Nd:YAG Laser is intended for use in general and plastic surgery and dermatology, and has been approved for the treatment of wrinkles and skin pigmentation, along with use in podiatry and similar procedures.

Sheaumann Laser, based in Massachusetts, has received approval for the use of its Sheaumann PL-1064 infrared laser. The system employs a AlGaAs laser diode and is intended for use in soft-tissue procedures such as ablation, incision and coagulation in dermatology, plastic surgery and podiatry.

Dentistry
CAO Group, a Utah-based OEM supplier of dental devices and materials with further interests in veterinary, forensic and solid-state lighting products, has received approval for its Precise SHP Diode Laser to be used for certain specific dental and oral surgery procedures. These include gingivectomy, contouring, ulcer and abscess care, along with other applications.

Since May 2012, CAO has been involved in a patent dispute with Biolase over claims that the California company infringed on a design for a laser system with an attached and removable fiber storage unit.