But Yole Développement report says that shortage of rare-earth elements could persist as incandescent lamps are phased out. 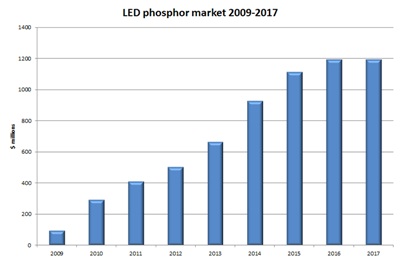 The market for phosphors used in high-brightness LEDs is set to grow rapidly as solid-state lighting becomes a mainstream technology, and reach $1 billion by 2015.

That is the prediction from analysts at France-based Yole Développement, whose latest “LED phosphors” report estimates the 2012 market for such materials at just over $500 million.

The materials, which include yttrium aluminum garnet (YAG), silicates and oxynitrides, are used to convert the blue and near-ultraviolet light produced by bare LED chips into white light. At the moment, the main applications for LEDs are backlighting of LCD screens in smart phones, displays and TVs, and the emphasis has been on producing bright white light.

But that emphasis will change as solid-state lighting grows, with the need for “warmer” white tones used in residential lighting applications. Beyond 2015, however, it appears that the market will become saturated, at a level of around $1.2 billion, with a significant chunk of the total remaining captive to LED makers.

However, Yole’s report does note the emergence of more than 20 phosphor companies in China as a threat to the established supply base, saying that improved quality and “potentially credible intellectual property” could be enough to satisfy the needs of the top-tier LED makers in China.

Warm colors
Analyst Eric Virey says that the next battle in the LED phosphor industry will stem from the rapid growth of applications requiring warm colors and saturated red emission in residential, display and retail lighting. To do that, red and green phosphors are added to the chemical mixture used.

Virey adds that both nitrides and oxynitrides offer excellent performance, but that their supply is currently controlled by the Japanese pair of Denka and Mitsubishi Chemicals. “Market price for these materials is 5-10 times higher than that of yellow phosphors,” he writes. “Multiple organizations are therefore scrambling to develop better, cheaper and non IP-restricted compositions. Tungstates, molybdates, green aluminates and selenides are being investigated.”

Change is also coming in the more traditional area of YAG phosphors. In the past, the supply of these has been dominated by the Japanese LED giant Nichia, thanks to its dominant intellectual property and litigious nature. But Virey believes that rival silicate phosphors have been closing the gap on YAG in terms of performance, while Nichia’s core IP will expire over the next few years – allowing more competitors to enter this part of the market.

Remote phosphors: efficient but expensive
Other new technologies could add to the market growth too. Remote phosphors could provide “significant upside”, Yole’s report suggests, by offering improved performance and efficiency in exchange for a larger amount of phosphor material.

At present, and partly as a result of the high cost of rare-earth elements, that additional material makes this technology prohibitively expensive, Yole says. “This constitutes the major roadblock for adoption,” states the report, although it points out that for certain applications remote phosphors will be the best option and in some circumstances will help to offset other costs by reducing component count.

And it is the availability and cost of those rare-earth elements that represents one of the biggest threats to market expansion.

“While supply constraints on light rare earths should ease soon, tension will persist for the heavier elements, including yttrium, terbium and europium, which are critical to both fluorescent lamp and LED makers,” predicts the Yole report. “Shortages could appear and persist even after 2015.”

“In the short-term, as incandescent and other inefficient light sources are phased out of the market in most countries, the consumption of fluorescent lamps will increase significantly, putting additional strain on [rare-earth] supply.”