Satellite applications are the focus of the latest UK Government funded "Catapult Centre" announced in early January by the Technology Strategy Board. But the prospects for a similar research centre dedicated to photonics are not looking good, say some in the industry. 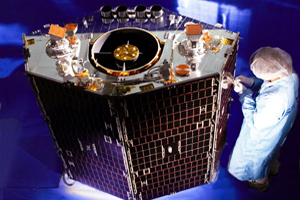 The UK Government’s Technology Strategy Board (TSB) is to establish a new ‘Catapult centre in Satellite Applications’. The Catapult will be a technology and innovation centre to help UK businesses develop new satellite-based products and services.

At the same time, hopes are fading that the TSB will agree to found a photonics-dedicated Catapult Not only are the confirmed three Catapults all applications focused – High Value Manufacturing, Cell Therapy and now Satellite Applications – but it appears that photonics may be seen by the TSB as an important supporting technology rather than as a distinct R&D area meriting multi-million pound research investment from Government.

Following the announcement of the launch of the Satellite Applications Catapult, photonics consultant John Lincoln, who is also Network Manager of the South of England Photonics Network, promptly tweeted: “Catapult centre announced - odds for photonics don't look good; the probability of photonics getting the final Technology Innovation Centre [the working title for the Catapult centres] appears to be fading” and “Photonics has certainly been hampered by the lack of high visibility big industry to back a photonics TIC.”

But looking on the bright side, Lincoln told optics.org that photonics would undoubtedly be a foundation technology for all of the confirmed Catapults “whether or not there will be a Photonics Catapult”.

“Photonics is a vital enabling technology, like electronics, software or ICT, which are critical for the specialist R&D application areas,” Lincoln added. In December 2011, the Fraunhofer organization announced it would be launching a Fraunhofer Centre in Photonics in Glasgow in 2012.

The Satellite Catapult will focus on applications of R&D in four growth areas: communications, broadcasting, positioning and observation. Photonics and sensors technologies are likely subjects for development projects within the new centre, “although not the primary focus” according to TSB spokesman David Hulmes.

The TSB will reveal later in January 2012 details of a competition to decide the management team for the Satellite Applications Catapults – as well as the focus of the next Catapult centre. With a funding model expected to be similar to the previously announced Cell Therapy Catapult, due to open in London in spring 2012, the Satellite Applications Catapult can expect a GBP 30 million annual budget, one third of which will come from the Government, one third from industry buying its research services and the remaining third from international funds such as from the European Commission.

The detailed nature of the Catapult’s R&D agenda and the composition of the management team is yet to be decided, the latter is expected to be announced following a competitive tendering process to be announced later this month.

It is expected to remove significant cost barriers and shortens the time UK businesses will wait to achieve a first flight demonstration for new equipment and technologies in space. Satellite services are expected to be an important growth area for the UK economy in the next decade and beyond. Worldwide, the space sector is expected to grow to GBP 400bn by 2030.

The TSB stated that the Satellite Applications Catapult is planned to help to achieve targets set out in the UK Space Innovation and Growth Strategy to grow UK market share from 6% to 10% by 2030 and create 100,000 new high value jobs. This approach was recently pioneered in the TechDemoSat project, which was jointly funded by the Technology Strategy Board and Surrey Satellite Technology Ltd.

The Catapult, expected to open in Autumn 2012,will also provide UK businesses, including SMEs, unique access to advanced systems for data capture and analysis to support the development of new services delivered by satellites.

David Willetts, the UK Government’s Minister for Science and Higher Education said: “The new Catapult centres will help turn today’s emerging technologies into tomorrow’s industries. The Satellite Applications Catapult will help the UK stay at the leading edge of space technology and help us achieve the potential we set out in the Space Innovation and Growth Strategy.”

David Williams, Chief Executive of UK Space agency said: “We're proud to be a part of this exciting project and look forward to continued collaboration with the Technology Strategy Board in this high growth sector. The Satellite Applications Catapult will boost collaboration across industry and is a great example of how the Technology Strategy Board and the UK Space Agency are working with industry and academia to develop new market opportunities.”

The TSB has held extensive consultation with the UK’s space community over the past nine months and has worked closely with the UK Space Agency, the trade association UKspace, the International Space Innovation Centre and the Space Special Interest Group of the Knowledge Transfer Network to assess the suitability for a Catapult centre in Satellite Applications.

It has also engaged with other organisations in different sectors where satellite applications are likely to be important and will seek to involve a broad cross section of industry in the implementation of the new Catapult centre.