Diversity of laser applications to industry has helped pull the business out of recession. 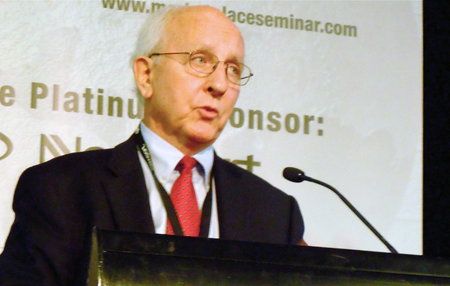 “This year, I’m going to start out by giving you some good news,” opined a generally positive David Belforte, the Editor in Chief of Industrial Laser Solutions For Manufacturing, and presenter of the forecast World Markets for Industrial Lasers and Applications. “Since the disaster that was 2009, the recovery has continued surprisingly rapidly and this year we should achieve a new high.”

Detailing the past 40 years of the performance of the industrial laser business, Belforte’s opening graph of total sales for each year showed unremarkable incremental growth from 1970’s zero dollar starting point right through to the mid-1990s.

Systems revenues – integrated tools based on lasers – are also forecast to grow from $6.1 billion (2010) to $7.1 billion (2011) and again, slightly less dramatically, to $7.3 billion in 2012. Belforte expressed some frustration with the difficulty of analyzing the activity of an increasingly diverse range of industries that depend on lasers but added more positively: “That diversity is what has pulled us out of the recession.”

The main applications sectors will continue to have the same relative market shares as they have for the past several years, strongly led in value by metal processing, which is forecast to support industrial laser sales of $1.4 billion in 2012, followed by marking and engraving ($0.4 billion) then semiconductor and associated processing ($0.2 billion). For the last of these industries, another noteworthy prediction by Belforte is the growth of fiber lasers for this activity contrasting sharply with flat sales of CO2 lasers.

Summarizing his extensive analysis of market sectors and laser types, Belforte joked, “Looking at sheet metal cutting business around the world will give you a good idea of what will be happening to industrial lasers.”

Besides building on the specialized data he had gathered from the key laser systems suppliers, Belforte considered more general economic indicators. He expressed bemusement at the apparent contradictory nature of global industry news - and therefore the markets for lasers – which he collected from just one month at the end of 2011.

A set of headlines from the business media illustrated this problem: “Factories hum as new orders jump” one day and “UN delivers gloomy outlook for 2012” the next, “Solar power use expands in South America” contrasting with “PV manufacturing equipment suppliers brace for difficult times”.

Despite this, Belforte was generally satisfied with the prospects for his industry, concluding, “Global manufacturing output is expanding and demanding new manufacturing technology. Incremental growth in new markets will add to solid bases in China, the US and South East Asia.

“Market surveys do not forecast any severe downturns but are cautious about the level of growth. Laser suppliers are content with modest growth in 2012. Therefore Industrial Laser Solutions is projecting a strong first quarter of 2012 followed by a tempering back to low single digit [percentage] growth for the remainder of the year.”