The company has now seen ten sequential quarters of growth, but warned that 2012 will pose some challenges. 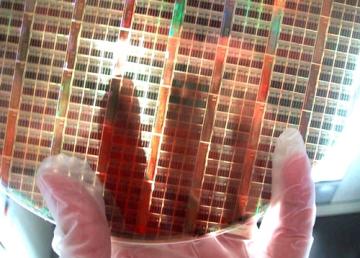 Ultratech posted fourth-quarter results that set records in several metrics, and which delivered the tenth sequential quarter of growth for the company. They also capped a year which CEO Art Zafiropoulo described as "spectacular."

Sales in Q4 2011 for the California-based developer of photolithography and laser processing equipment rose to $56.1 million, up from $54.9 million in the previous quarter and from $43.6 million in the same quarter a year ago. Net income for Q4 2011 increased year-on-year to $11.2 million from $6.3 million.

Zafiropoulo told analysts that the figures represented a number of company high-points: "A record operating income for a single quarter, record net incomes for the fourth quarter and for the full year, record revenues and record bookings. By most metrics 2011 was a spectacular year with a sensational fourth quarter."

The company's laser spike annealing (LSA) systems enjoyed what the CEO felt was a breakout year, with bookings for 2011 increasing by 47 percent compared to the previous twelve months, and Ultratech plans to increase its LSA production capacity during the first half of 2012. Bookings for Ultratech's advanced packaging platforms and nanotechnology MEMS systems also rose in 2011, by 26 percent and 48 percent respectively.

Zafiropoulo indicated that the prospects for 2012 remained unpredictable nonetheless, and took the opportunity for a small comment directed at those analysts who he said had recently expressed skepticism about the company's level of capital expenditure. "The future outlook for Ultratech has improved despite some analysts' estimates, which demonstrates how difficult it is to project very far into the future," he said.

New products and applications
Ultratech CFO Bruce Wright said that the outlook for the coming quarters was more positive than it had seemed three months ago.

"Visibility is now better for the first half of year, but still cloudy for the second half," he said. "We had thought that the first quarter would be the 'trough' period, but seeing a stronger order rate in Q4 helped a lot with revenue and earnings outlook. If you ask me now which quarter I'm most concerned about, it would be the second quarter of 2012."

Wright indicated that he was revising an earlier projection that Ultratech revenue in 2012 would be down by 15 to 20 percent compared to 2011, and now expected the change in full-year revenues to lie in the range between flat and down by 10 percent, with the proviso that the second half of the coming year was still distinctly hazy.

Ultratech has announced a new operating model, aimed at boosting gross margins across its product line to 55 percent or greater. It already achieves margins above 50 percent on both its advanced packaging and laser tools, after what Wright called "a long hard slog to get there." Margins on the LED tools are currently in the 40 percent range, so it's in this area that the company is working hardest to reach its target.

Zafiropoulo also indicated that the company plans to expand its served market, and intends to unveil new products and applications in the second half of 2012 that will help the year's bookings, but not have a material impact on revenue until 2013.

"Once we get through this foggy period we expect to be more aggressive in our projections," he said. "We had a great year, we believe there are a lot more to come."

• The markets took Ultratech's news well, with shares in the company rising by 6 percent in the hours following the results announcement. Semiconductor stocks, Ultratech included, were already looking more robust than many other sectors, having finished 2011 in good shape.