Biophotonics conference highlights potential for coherence imaging to pick up signs of cancer in early stages. 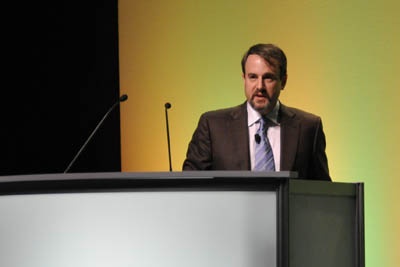 by Mike Hatcher at Photonics West 2012 in San Francisco
This year’s “hot topics” session at the BiOS biophotonics conference – part of the Photonics West event – suggests that optical diagnostic techniques, and in particular coherence tomography, will play a significant role in the fight against cancer.

While the latest statistics from the American Cancer Society (ACS) show that survival rates for some forms of the disease are now very good, and that the overall incidence of cancers is actually decreasing in the US, there remain a number of cancer types that are difficult to diagnose – and death rates from those types remain stubbornly high. With early detection one of the keys to better survival, more effective diagnostic techniques ought to have a major positive impact on the ACS’ figures in years to come.

One example is esophageal cancer, for which the five-year survival rate is among the lowest, at just 19% [ACS figures]. Hot topic presenter Adam Wax and his team at Duke University have been working on a clinical probe to diagnose the pre-cancerous dysplasia stage of the disease. That probe uses an advanced form of optical coherence tomography (OCT) that has been under development at Duke for nearly a decade, and now also through funded spin-out company Oncoscope, Inc.

Wax says that the probe, which combines the depth resolution of OCT with a high sensitivity to light scattering, has shown through in vivo pilot studies that it is fast enough for clinical use, and able to detect the larger cell nuclei that are characteristic of dysplasia. It can also confirm the absence of dysplasia in patients suffering from the condition Barrett’s esophagus – caused by long-term acid reflux and a strong indicator of future development of dysplasia and cancer caused by a new cell lining produced by the esophagus to protect itself from the acid.

In their most recent work, the Duke team is developing an even more advanced form of OCT that combines resolution with spectral information – yielding “true color” OCT in the form of “angle-resolved low-coherence interferometry”, which is what Oncoscope is aiming to develop commercially.

Because it yields a powerful combination of spectral as well as structural information, this technique has the potential to identify specific molecular signs of both cancerous and normal tissues. And that ought to produce diagnostic information that can improve on the current gold standard method of histological biopsies.

Standard histology: flawed
Though it is the gold standard, with certain types of cancers the cell histology can be open to different interpretations by individual pathologists, meaning that cancers can go unnoticed and untreated. As another hot topic speaker, Stephen Boppart from the University of Illinois at Urbana-Champaign (UIUC), noted, where histology is flawed and subjective, photonics should offer smart, specific diagnoses based on molecular information.

As well as OCT, Boppart has been working on a novel interferometric coherent anti-Stokes Raman spectroscopy (CARS) technique for quantitative histology – which has the potential to add information on the extent of tumor growth to the basic diagnosis.

Adding to the cancer diagnosis theme at the same session was clinician Brian Wong from the Beckman Laser Institute and Medical Clinic in California, who coined the phrase “image guided individualized medicine” as a way to describe how an OCT probe can be used to investigate the head, neck and upper airways in patients suffering from conditions as diverse as cancer and severe sleep apnea.

Structures like the nose and the epiglottis are extremely complex and difficult to investigate, and Wong noted one potential application for the technique in premature babies, a large number of whom suffer from a condition known as “sub-glottic stenosis”, which affects their ability to breathe and swallow.

Meanwhile Eva Sevick from the University of Texas Health Center demonstrated how near-infrared photonics could offer up a future diagnostic imaging modality on a level with PET and MRI scans. Adapting technology initially developed for defense applications, her team has been able to image the growth of vessels in the lymph structures of humans non-invasively for the first time.

Cancer diagnosis was not the only “hot” topic under discussion; also presenting some remarkable advances at BiOS was Stanford’s Daniel Palanker, whose photovoltaic retinal prosthesis for restoring sight to the blind was described by another presenter on the night as “like something really out of Star Trek”. The technology has seen initial success in clinical trials, with 23 out of 30 patients treated now able to read large-font writing.