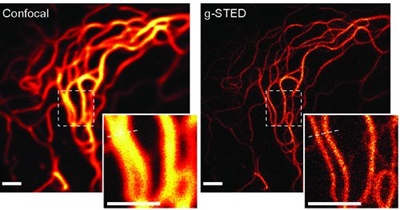 The stimulated emission depletion (STED) microscopy technique, which beats Ernst Abbe's optical diffraction limit through clever use of fluorescence and de-excitation, has been used to produce in vivo images of synapses in the brain of a ‘higher’ animal for the first time.

Stefan Hell, who invented the STED technique more than a decade ago at the Max Planck Institute for Biophysical Chemistry in Göttingen, Germany, told delegates at the BiOS 2012 conference in San Francisco that “the door is now open to study synapses directly”. He showed a video in which a living mouse’s synaptic activity had been directly observed using the technique.

The details of that work are set to be published in the journal Science, and with Hell adding that the diffraction limit effectively no longer exists thanks to the STED and related techniques, molecular-level imaging is now possible with a combination of visible light and regular lenses.

One concern with STED and its use in clinical settings has been the relatively high level of photon flux needed to create the images – and the effect that this might have on people. But thanks to the recent development of gated STED (known as gSTED), lower photon fluxes can now be used, while even sharper images are obtained.

Leica Microsystems, which already sells a STED microscope, recently signed a new licensing deal with the Max Planck Society and the German Cancer Research Center to commercialize gSTED. Products are set for launch in the first half of 2012, and existing STED tools from Leica will be upgradable to gSTED.

In his plenary talk, Hell said that the technique can also extend beyond fluorescence, which is where it has been focused thus far, to other optical effects such as absorption and scattering.

Nor is the approach limited to imaging – the broad concept of beating the diffraction limit could also have applications in nano-writing, a form of maskless lithography, and Hell is hopeful that this might lead to another revolution, this time in nanometer-scale 3D writing.

• See Stefan Hell's optics.org article on the details of the STED principle and related techniques.