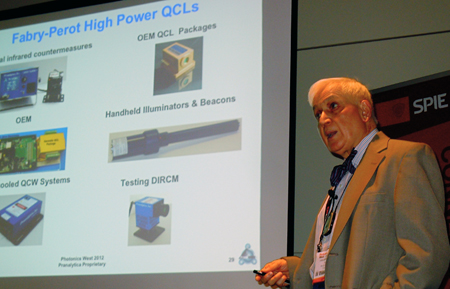 Despite the 8.00am start on a Sunday morning, interest in the Quantum Sensing and Nanophotonic Devices IX conference (no. 8268) was so great that the event had to be relocated to a larger hall to accommodate the hundred-plus early-bird delegates.

Outside of the photonics community there are not many well-known laser celebrities but this morning’s keynote speaker, Dr. Kumar Patel, inventor of the carbon dioxide laser, former head of laser R&D at Bell Labs and now president and CEO of Pranalytica, is surely one of the better recognized laser legends amongst his peers.

His keynote speech entitled “High power infrared Quantum Cascade Lasers: advances and applications” detailed Patel’s observations of what is happening with QCLs, what the company he founded in 2000 has been doing in particular and the opportunities he sees for this rapidly emerging technology – “currently mainly used for military sensing [chemical weapons and explosive detection] but likely to find a variety of civilian applications.”

He commented, “Multiwatt medium and long wavelength infrared QCLs, operating at room temperature, are now a reality. At least two groups - including Pranalytica - have demonstrated around 5 W of MWIR CW/RT [room temperature] power.

“Quantum cascade lasers, because of their SWaP advantages over other laser sources in the MWIR and LWIR spectral regions, are being rapidly inserted into defense and homeland security applications,” he added.

Patel described the technical advances that have led Pranalytica to be able to develop high power, high WPE, MWIR and LWIR QCLs. He also described applications where the SWaP advantages of QCLs are resulting in such lasers replacing traditional laser sources and opening up new possibilities for wider use of QCLs, perhaps in free space optical communications and lidar for air quality monitoring.

By modifying and improving its QCL laser designs, Pranalytica has been able to recently boost output of its room temperature models at different wavelengths with and without a thermo-electric cooler as follows: output at 4.6µm, >4.7W, with a wall plug efficiency of >16%; output at 4.0µm, >2.0W, WPE 10%; and output at 7.1µm, >1.4W, WPE 10%. Non-cooled models are slightly less powerful and efficient at the shorter wavelengths but similar at 7.1 µm. These are now in the process of being commercialized. 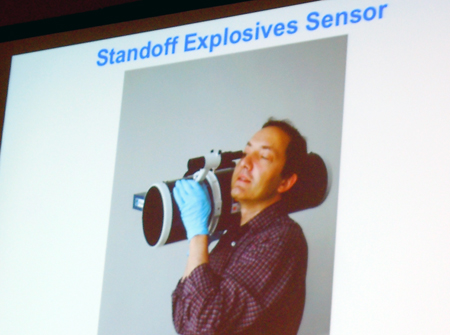 Patel described in detail how QCL technology has been adapted into military sensing systems for the US military detecting chemical warfare agents and traces of explosives – such as are used in improvised explosive devices in the current conflict in Afghanistan. He said, “The following applications are actively being explored: directional infrared countermeasures and associated testing, target designation and illumination, explosives detection and medical and environmental systems.”

In January 2011, Pranalytica, launched a range of high power multiple wavelength QCL systems that deliver multiwatts of continuous wave room temperature power output, at one short wavelength infrared (SWIR) and two midwave infrared (MWIR) wavelengths. The three laser outputs are collinear and collimated and each has excellent beam quality needed for a variety of defense and homeland security applications.

The collinearity between the combined laser outputs at the three wavelengths is better than 1 milliradian, which coupled with the excellent beam quality of all three lasers allows projection over long distances. Power output at each one of the laser wavelengths can be individually controlled and can be modulated with arbitrary pulse sequences.

Details of all of this session's presentations on Quantum Sensing and Nanophotonic Devices IX can be seen on the SPIE Website.