Lighting giant says it could release GaN-on-silicon chips to the market in two years, further reducing the cost of solid-state lighting. 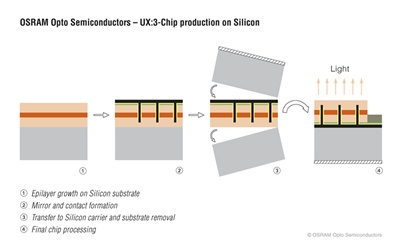 Low-cost LED chips fabricated on a silicon substrate could be on sale from Osram’s Opto Semiconductors division within two years, after researchers at the company said that its pilot-stage devices now matched the performance of conventional emitters.

The gallium nitride (GaN) chips are traditionally produced on either a sapphire or silicon carbide (SiC) substrate, because of the much closer match between the crystal lattices, or atom spacing, of those materials. While silicon has long been seen as a platform that could be used to reduce chip costs, the strong lattice mismatch between it and the GaN light-emitting layers has proved extremely difficult to overcome.

“We have succeeded in optimizing the quality of the GaN layers on the silicon substrates to the point where efficiency and brightness have reached competitive market levels,” he said. According to the Osram OS data, silicon-based chips housed in its standard “Golden Dragon Plus” LED package showed 58% efficiency, delivering 634 mW output at 3.15 V.

“These are outstanding values for 1mm2 chips at 350 mA,” reported the company, adding that with the addition of a conventional phosphor converter to change the color of the emitted light from blue to white, these values corresponded to an output of 140 lm, and a white-light efficacy of 127 lm/W - figures comparable with state-of-the-art commercial devices.

Silicon scale
While the past year has seen a sharp drop in the price of LED chips as a result of greater supply and competition in the market, the technology is still much more expensive than conventional sources used in general lighting. Stauss says that there remains a need for LED components to get “significantly cheaper” while maintaining quality and performance levels.

Using a silicon base has the potential to achieve this, not just because the raw silicon material is cheaper than both sapphire and SiC, but because it has already been scaled to much larger sizes than either of the conventional materials by the mainstream semiconductor industry.

Osram’s prototypes have been fabricated on a 150 mm (6-inch) wafer platform – a size that supports simultaneous production of more than 17,000 1 mm2 LED chips on a single wafer. But a 200 mm (8-inch) wafer would nearly double that number, while also enabling the use of more advanced semiconductor manufacturing equipment now standard in microelectronics fabs.

“We are developing new methods along the entire technology chain for this purpose, from chip technology to production processes and housing technology,” added Stauss.

Silicon pioneers
Osram OS is by no means the first LED company to demonstrate high-performance device fabrication on a silicon platform – although it is the first of the major producers to state its aims so publicly. As a vertically integrated lighting company, it is also in the ideal position to use the technology in its own future lighting products. 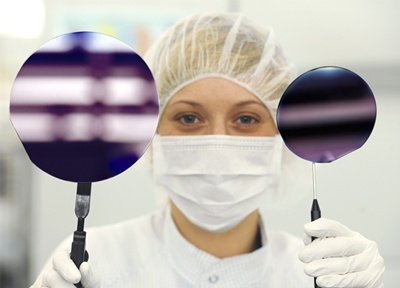 Other companies to pioneer the GaN-on-silicon approach include China’s Lattice Power, which claims to be the first to move the technology into volume production, while Osram’s collaborators on the GaNonSi BMBF project include Azzurro Semiconductors, which has recently been investing in production equipment to manufacture GaN-on-silicon epiwafers.

A year ago, Azzurro told optics.org it had calculated that shifting LEDs from conventional 2-inch sapphire-based production to an 8-inch silicon platform would make the chips 80% cheaper. California-based Bridgelux is another to have claimed good device results from the approach, while there is also significant expertise at university level in the UK.

One of the most important stages in the production process is the deposition of a so-called “buffer” layer between the host material and the light-emitting structure to overcome the lattice mismatch. A key difficulty with the GaN-on-silicon approach has been to deposit such a layer in a cost-effective manner, and Osram OS told optics.org that it was using metal-organic chemical vapor deposition (MOCVD) to produce this layer.