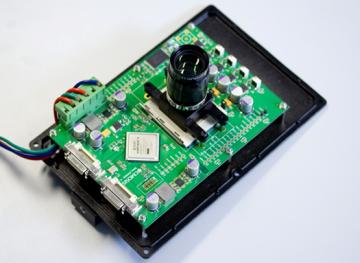 Hyperspectral imaging (HSI), in which spectral information is collected from several narrow but adjacent wavelength bands across a continuous spectral range, has proven its value as an analytical technique thanks to the higher resolution and selectivity it can provide over other imaging methods. The major drawback is that the imaging systems themselves tend to be large, expensive, and complicated to operate.

Researchers at IMEC, Belgium's semiconductor and nanotechnology research hub, have developed a solution that could help overcome these hurdles and push the technology into new applications, in particular certain biomedical procedures.

The key breakthrough lies in the use of Fabry-Pérot filters, a design of interferometer employing two parallel mirror surfaces between which incoming light is reflected multiple times. These filters can be made to transmit only a narrow band of wavelengths while rejecting the rest, and the physical orientation or tilt of the filter determines the peak wavelength for transmission.

The IMEC design integrates Fabry-Pérot filters monolithically on top of the image sensors, as Murali Jayapala of IMEC's Nvision imaging program explained to optics.org. "Conventional hyperspectral cameras typically use discrete optical components, including lenses, some form of diffraction grating or prism, and an image sensor. These separate components, in particular the diffraction grating/prism, tend to make the system more bulky. The core of our new hyperspectral filter consists of two reflective surfaces of certain height, acting as a specific filter for a particular wavelength and which is placed directly on top of the image sensor. We spread filters for different wavelengths across the sensor, effectively replacing the usual diffracting grating with a Fabry-Pérot 'staircase', integrated monolithically directly on top of the image sensors."

This novel approach has not been successfully used before, not least since the core fabrication step of integrating the filters onto the sensor is, as Jayapala noted, "non-trivial." But HSI cameras based on this design should ultimately be cheaper than conventional systems, since the integration step could be incorporated into the existing manufacturing infrastructure used for the sensor itself, including assembly, testing, packaging and calibration. The design also produces a more compact system; the prototype now developed by IMEC measures only 1cm3.

Fewer scans, faster scanning
The IMEC design brings with it a practical advantage, opening up a new approach to hyperspectral scanning in which the complete image sensor is utilized to take a full image of the scene of interest but different parts of the sensor yield different spectral information.

"Conventional hyperspectral line scanners scan a scene one line at a time, storing the spectral information for each line onto the image sensor," said Jayapala. "Spatial scanning is then needed to obtain complete 2D information from a scene, and the overall scanning speed is limited by the speed at which a single line can be scanned, rather than by the number of spectral bands. Our system can make scans at specific hyperspectral bands, where each scan is spread over several lines of the scene. This collects the complete information from a 2D scene through a mixed spatial/spectral scan, and means that fewer scans are needed in total." 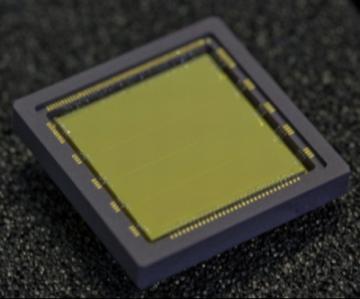 The increase in speed allows the IMEC system to scan at greater than ten thousand lines per second and image at 25 frames per second, according to Jayapala, compared to the 180 lines per second of conventional HSI systems. The new prototype features hyperspectral filters incorporated on a 4 megapixel CMOS image sensor, transmitting 100 spectral bands of 5 nm bandwidth each. Transmission efficiency is said to be approximately 85 percent.

These advantages could make an impact in several different application areas, and IMEC expects that products using this technology could start coming to market in as little as two years. "The higher speed will have a big impact in food and other material sorting applications, and miniaturization in combination with lower cost will open up many consumer applications as well," commented Jayapala. "For example, we could see mobile phones incorporating a hyperspectral sensor used to analyze household materials, food, or even to monitor our general health."

Although the IMEC system currently employs a CMOS image sensor, the same approach can be applied to CCD sensors too. The spectral range is limited primarily to the visible range of the spectrum and the near infrared, from 400 nm to 1000 nm, but Jayapala foresees extending the integrated Fabry-Pérot approach to other types of sensor such as InGaAs sensors, and the spectral range broadened into the far infrared at around 2 microns. This would enable applications in plastic sorting and pharmaceutical applications, where molecular information is prominent in the infrared region.

"This is a significant step in our road map, as a validation of our core approach," said Jayapala. "We now have an operational prototype targeted at machine vision applications, and are in the process of developing custom solutions in bilateral projects with our partners for selected application areas. Our next target is to create a snapshot system in which a limited number of bands relevant for an application will be captured in one shot, so that scanning is not required. In addition, although our current work is based on the use of static filters which cannot be changed once they have been fabricated to a certain spectral range, we have started to investigate if the filters can be made tunable through MEMS-based solutions."