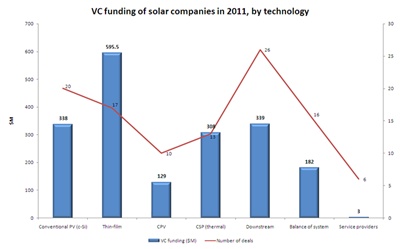 Last year may have been an especially tough one for the solar energy industry, but venture capital is still flowing into the sector, claims a new report.

The analysis by Mercom Capital Group finds that $1.9 billion of VC cash was invested in solar technology manufacturers (including both photovoltaic and thermal technologies) in 2011 – a higher figure than both 2010 and 2009, although only around half of the total registered in 2008.

"Investment activity in 2011 was robust," said Raj Prabhu, managing partner of Mercom. "Whether you point to the dramatic module price declines, Europe's diminishing incentives, or the so-called 'Solyndra effect,' solar continued to gain attention and dollars for technology and innovation through venture capital funding."

The top investor in solar last year was Kleiner Perkins Caulfield & Byers, which took part in eight of the 111 funding deals. The latter figure also represents a record number of VC deals for solar in a given calendar year, with the previous best being the 93 deals agreed in 2008.

In terms of technology area, PV manufacturers dominated the investment landscape, accounting for $1.6 billion of the total, with concentrating solar (thermal) power receiving $300 million – although a large chunk of that total was in a single, $201 million investment in BrightSource Energy.

Thin-film investment
Aspiring thin-film copper indium gallium (di)selenide (CIGS) manufacturers continue to be the most attractive to VCs, it appears, with $467 million invested despite the relative immaturity of the technology, which is yet to make any major market impact. Other thin-film technologies received $130 million, while crystalline silicon – the most conventional PV technology, with the largest market share by far – received some $338 million through 20 deals.

In what proved to be a strong year for concentrating photovoltaic (CPV) specialists, ten separate deals saw $129 million raised as the profile of this approach gained momentum and the first utility-scale build-outs were agreed.

Aside from BrightSource, those to receive the largest individual investments last year were mostly CIGS firms – despite the infamous Solyndra episode. US-based Stion, which is backed by Khosla Ventures and semiconductor giant Taiwan Semiconductor Manufacturing Company (TSMC), raised $130 million, while MiaSolé ($106 million) and HelioVolt ($85 million) were among the four to receive the largest backing.

M&A exits
Beyond VC investment, 2011 was also a busy year on the mergers and acquisitions front. "Falling panel prices and oversupply brought about a lot of consolidation activity," points out Prabhu. "With valuations of publicly-traded solar companies at record lows, M&A was the go-to exit strategy.” Here, the key developments included oil giant Total’s acquisition of a majority stake in SunPower, which was further extended later in the year.

The Chinese state also continued to back its domestic manufacturers – albeit to a lesser extent than in 2010. Mercom suggests that China’s various loans, credit facilities and strategic financing instruments relating to the solar industry amounted to $15.5 billion last year, less than half the 2010 figure. JinkoSolar was the largest single recipient, thanks to a $7.6 billion deal with the Bank of China.

Meanwhile the US Department of Energy issued some $10.9 billion in solar-related loan guarantees – almost entirely aimed at power generation projects, rather than backing for technology ventures like Solyndra.

Despite the unexpectedly robust activity in 2011, and a fourth quarter that saw a strong rebound in VC funding following a relatively quiet Q2 and Q3, the prognosis for 2012 remains challenging, concludes Mercom. “2011 was a tough year for the solar industry with many companies announcing shut downs, bankruptcies and restructuring,” it states in its analysis. “There will be a lot more to come in 2012, as things may get worse before they get better.”