The two contractors, both working with cascade laser specialist Daylight Solutions, reveal their offerings for the US Army’s common IRCM program. 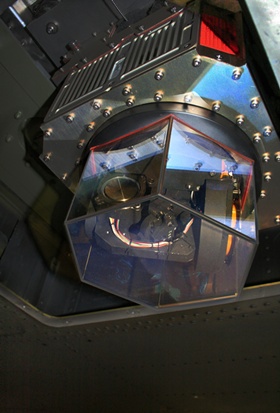 Northrop Grumman and ITT Corporation’s Electronic Systems division have each unveiled new infrared countermeasure (IRCM) systems based on quantum cascade lasers (QCLs) as candidates for future deployment by the US Army.

Both companies have been working with the QCL specialist Daylight Solutions on the new designs under the US Army’s Common IRCM (CIRCM) program, pursuing an open systems approach where components developed in both the defense and commercial sectors can be used. ITT and Northrop made their announcements at the Association of the US Army (AUSA) annual meeting being held this week in Washington, DC, ahead of an Army contract selection scheduled for early 2012.

The CIRCM systems are designed to protect aircraft from heat-seeking missiles, for example those launched from man-portable air defense systems (MANPADS). QCLs provide mid-infrared emission wavelengths that disorient an incoming missile, throwing it off course. Conventionally, aircraft have used flares to confuse heat-seeking missiles, but newer and smarter generations of MANPADS are able to distinguish between flares and aircraft.

Existing versions of countermeasure systems, such as direct IRCM (DIRCM), use conventional laser sources and have been widely deployed. But they have been found to be too heavy for use in the majority of helicopters – the CH-47 Chinook being the exception, according to a Scientific American blog published earlier this year.

As a result, the Army is looking for smaller, lower-weight IRCM systems, and the compact QCL-based designs suit that requirement. In 2010, the Army issued an initial request for proposals for CIRCMs, and among those to respond have been Northrop and ITT, along with Lockheed Martin and Raytheon.

The other major advantage of the QCL-based approach is that they operate “out of band” in the mid-IR, meaning that they do not tip-off an adversary – something that more easily detectable near-IR wavelengths are susceptible to. Daylight’s external-cavity designs are said to be compatible with any commercially available QCL chips, although typically devices based on the InGaAs/InP material system are used.

Upgradability
ITT says that it has been working with Daylight for nearly four years, while pointing out that Northrop has until recently been relying on its own laser business with regard to CIRCM offerings. “Northrop's choice to use Daylight is another example of the company following the lead of ITT,” the company told optics.org. “ITT was the first company to develop a decoupled, modular CIRCM solution that relied on ruggedized fiber-optic cable to transfer laser energy. Others have now followed that same lead.”

According to ITT, the advantages of a modular approach include continued upgradability – for example to use lasers with different emission wavelengths - while the decoupled design allows for the laser to mounted anywhere on an aircraft. “Our technology-agnostic, ‘best of breed’ approach guarantees that the industry's best components become part of the system, no matter at which company they are developed,” ITT added.

Previously, ITT had integrated Daylight’s fiber-coupled JammIR lasers into an IRCM system that was deployed for tests on board UH-60 Blackhawk helicopters. It has developed its own pointer-tracker unit to detect incoming threats and direct the Daylight laser to disorient them. The latest CIRCM design is said to be similar, although the companies have migrated away from legacy mid-IR fiber because of associated reliability problems. 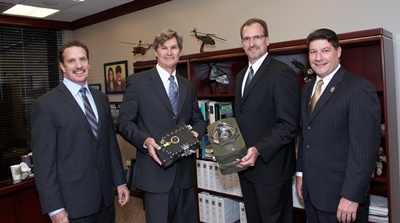 System maturity
Northrop, which says that its IRCM systems have been installed on more than 750 aircraft, with over 2400 DIRCM lasers fielded to date, is leveraging its long-standing collaboration with SELEX Galileo for the new “Solaris” QCL-based system - SELEX provides the pointer-tracker jam head. Northrop is also now a shareholder in Daylight Solutions, having bought an equity share in the San Diego company earlier this year.

Jeffrey Palombo, general manager of Northrop’s Land and Self-Protection Systems Division, stressed the company’s combination of new technology with system maturity as an advantage, saying: “We are adding the leaders in QCL technology to the Northrop Grumman CIRCM solution. Our candidate system offers the warfighter the most mature aircraft protection available in an open architecture package.”

Meanwhile Lockheed is working alongside both Daylight and DRS Technologies on its CIRCM offering – with DRS Technologies providing a pointer-tracker unit featuring a distributed aperture design. Raytheon, which is also working on QCL designs, claims that its IRCM systems are now sufficiently lightweight to be deployed on unmanned aerial vehicles (UAVs).

The next stage of the Army’s competitive CIRCM program will likely see a down-selection of the candidate systems in January 2012. ITT is expecting two technology maturation contracts to be awarded, followed by a 21-month period of tests, final selection of a single CIRCM technology and field deployment in 2017.