A multi-spectral scanner developed for historical manuscripts is now being commercialized. 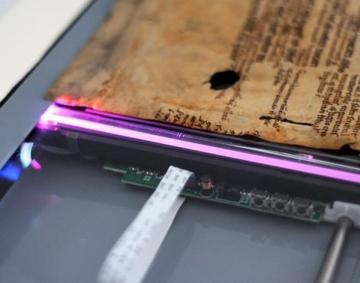 Multi-spectral imaging has proven its value in analyzing historically significant manuscripts and artwork, where processing spectral data captured over a number of wavelength bands can help to indicate alterations, errors and changes of heart.

A new spin-out from the University of Oxford is taking a system developed for the study of ancient texts and making it available to forensic scientists, law-enforcement agencies and others concerned with the veracity of more modern documents.

"Multi-spectral imaging has been something of a black art, but we want to turn it into a professional PC accessory," Mike Broderick, CEO of Oxford Multi Spectral (OMS), told optics.org.

OMS has based its system on a flat-bed scanner, rather than a camera, for maximum simplicity and user-familiarity. "We have replaced the LED that feeds the light bar of a flat-bed scanner with a series of fiber optics, fed by LEDs of individual wavelengths," said Broderick. "Switching these LEDs on and off in sequence lets us take a scan at each wavelength."

As well as being simpler to operate than a camera-based system, the flat-bed approach ensures that the sensor receiving the spectral information sits very close to the document of interest. This keeps the focal length short and minimizes any geometric distortion. It also ensures that the document is in exactly the same position for each wavelength scanned, keeping each pixel of each scan in perfect registration.

"Our system can accommodate six or 12 different wavelengths, and capture each of those sequentially," explained Broderick. "Algorithms developed in-house then extract information from the collected spectral data. The typical resolution used by researchers studying such documents is 300 dpi, but the OMS scanner is quite capable of achieving 600 dpi and retaining it over an A4 document."

The wavelengths used currently range from 350 nm to 800 nm, but OMS is aiming to extend the range. Venturing further than 800 nm requires more specialized and relatively expensive LEDs, but it so happens that investigations in the infra-red at around 1700 nm can yield high-resolution data about the pigments in inks and paints.

Classical background
"Away from the study of historical manuscripts, the market for multi-spectral systems is fragmented," explained Broderick. "Users in defense and security are generally interested in studying what has been deliberately embedded into documents and confirming its authenticity. On the other hand, forensic scientists never know what they will be confronted with on a daily basis, and so are looking for total versatility from a system able to apply a range of spectral wavelengths. We are attempting to satisfy both camps."

OMS envisages equipping its scanner with a range of ready-made algorithms, able to extract the data from different kinds of samples and provide valuable data to different groups of users. Selecting a suitable program could be no more difficult than selecting a button on the PC controlling the system.

In line with other Oxford University spin-outs, OMS was initially fostered by the university's technology-transfer subsidiary, Isis Innovation. But more unusually, OMS is the first company to emerge from the university's Humanities Division.

"OMS has its roots in a research project investigating ancient papyrus documents called the Oxyrhynchus Papyri, which is based in the Faculty of Classics," commented Broderick. "Multi-spectral imaging is the only method that provides the detail required, but standard systems were not very user-friendly for analyzing the huge numbers of manuscripts in the project. Our system provides a better approach, and we have currently scanned a quarter of a million historical documents to prove it."

Broderick anticipates that OMS will bring its system to market early in 2012. Interested parties and potential end-users are invited to contact him by email at Mike.Broderick@oxfordmultispectral.com for more details.