Colorado installation featuring Amonix CPV systems will become the largest in the world when completed. 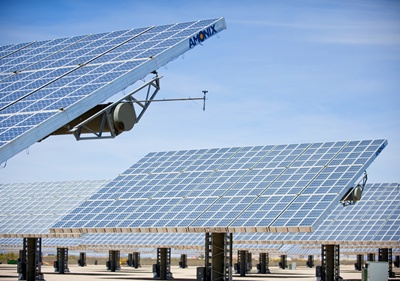 The US Department of Energy has finalized a $90.6 million loan guarantee to power generation company Cogentrix that gives the final go-ahead for what will soon become the world’s largest concentrated photovoltaics (CPV) facility.

The 30 MW project is under construction near Alamosa, Colorado, where the high level of direct solar irradiation provides good conditions for CPV, which relies on clear blue skies to keep energy output close to its peak level.

Under the terms of the related power purchase agreement, the Public Service Company of Colorado will buy the power generated by the site for 20 years after it becomes operational.

Amonix, which has a large CPV module manufacturing facility in Nevada, is the key systems supplier to the project, under which more than 80% of components are expected to be sourced from within the US.

Amonix is widely regarded as leading the emergence of CPV as a viable and bankable technology to rival conventional PV in geographies with high levels of sunshine, and the Alamosa facility will be the largest such installation to date when completed – although a much larger CPV facility may be built in southern California with systems produced by Soitec Solar, if other DOE loan guarantees are forthcoming.

Last month, Amonix CTO Vahan Garboushian told optics.org that Amonix would be responsible for around four-fifths of the expected 60-70 MW of CPV systems set to be installed around the world in 2011. The firm has just completed a 5 MW site in New Mexico and a 2 MW installation in Tucson, Arizona, and several years ago it also built the world’s largest existing CPV farm, a 7.8 MW facility in southern Spain.

While that Spanish installation is based on silicon solar cells, all of Amonix’s systems are now built around multi-junction III-V cells that have a much higher conversion efficiency. Garboushian believes that the cells, which typically operate at around 40% today, will improve to 48% through various design and engineering changes – a level at which he thinks that CPV would become extremely competitive, even in regions of lower direct sunshine.

According to DOE figures, the 30 MW facility in Alamosa will produce 75,000 MWh of electricity annually – equivalent to just under seven hours of peak output per day. That is expected to be sufficient to power some 6500 homes in the local area. The construction part of the project will also provide around 100 jobs – not as many as typical solar projects, although that is partly because CPV installations provide more energy output per unit area compared with conventional large-scale arrays based on silicon and CdTe panels.