Largest ever survey of people working in optics and photonics finds that aerospace is the highest-paid discipline.

Preliminary findings from a global survey of more than 7000 people working in various areas of optics and photonics show that the average (median) salary for those employed in the field is $75,000. 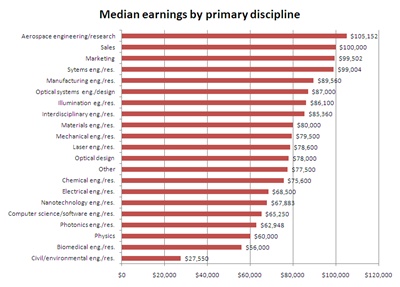 The survey, conducted by SPIE and the largest of its kind yet undertaken, found a very wide distribution of salaries, dependent largely on the location of an employee and whether they are working in industry or academia.

A similar situation exists in Europe, where the median salary is only $58,000 – only just over half the equivalent in North America. And although the European median is heavily influenced by low-income countries such as Poland, Ukraine and Russia, SPIE’s analysts say that salaries in the richer parts of Europe are still lower than North America, Oceania (Australia and New Zealand) and parts of Asia.

The median in higher-income European countries, including Germany, France and the UK, is $65,250, compared with $85,242 in higher-income Asia. A possible reason for the discrepancy is that the higher-earning disciplines are more concentrated in North America – although the survey analysis does not go that far.

Workers identifying themselves as employed in aerospace engineering and research positions appear to be the highest-paid, with the discipline showing a median salary of $105,152. They rank slightly ahead of workers in sales and marketing positions.

Curiously, those ranking among the lowest-paid are found to be working in civil, environmental and biomedical engineering and research, while the median figure for physicists is $60,000.

One clear result from the survey is the salary premium that can be earned from working outside of academia, although the size of that premium varies geographically and is generally most pronounced in developing economies. In North America and the richer parts of Europe, the premium works out at 30%, while those moving from academia to industry in lower-income Asia and Africa could expect to double their pay.