As the National Ignition Facility closes in on laser fusion with energy gain, there are calls for the UK to coordinate a dedicated effort. 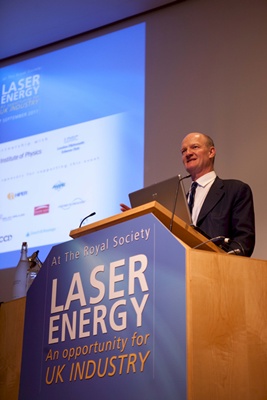 UK scientists are calling for a national program and technology roadmap to support the development of laser fusion as a clean and renewable future energy resource.

John Collier, the director of the UK’s Central Laser Facility (CLF), made the call at a Royal Society meeting on the topic organized by The Research and Development Society and attended by David Willetts MP, Minister of State for Universities and Science. At the event, the US National Ignition Facility (NIF), the Rutherford-Appleton Laboratory (RAL) and the Atomic Weapons Establishment (AWE) announced a new memorandum of understanding covering laser fusion development.

The CLF is already directing the HiPER project, a European effort to demonstrate the viability of laser fusion for energy production, but Collier is urging more political and industrial support for the technology. “The UK needs a formal national program in laser energy,” Collier said, adding that industry must be at the heart of the effort, working alongside academia through the involvement of AWE and NIF to develop a technology roadmap.

Encouragingly, Willetts said that he wanted to ensure that the UK would be involved in both inertial confinement (i.e. laser-based) and the more conventional magnetic fusion, and that the laser approach could “no longer be dismissed as something on the far horizon”.

“Laser energy certainly has the potential to provide a sustainable long-term solution for secure electricity,” he said. “It would be compatible with our existing distribution infrastructure, it’s safe because if something goes wrong it just stops, and it looks at the moment as if it will be affordable compared with current energy sources. It ticks a lot of the boxes, and we are very interested to see how far the technology can go.”

The Minister also highlighted how UK industry could benefit from the development of many of the key technologies needed to support a laser fusion project. And although Willetts was unable to announce any specific funding for the approach, he did stay on at the meeting to listen to an update from NIF director Ed Moses on the impressive recent progress made at NIF.

NIF team approaches gain conditions
The NIF team is nearing the conditions required to achieve fusion with energy gain. The latest shots with the giant 192-beam laser system have delivered an energy in excess of 1.4 MJ to the target, a tiny deuterium-tritium pellet, Moses said – closing in on the goal of 1.8 MJ. Within the past week, the beam has produced its highest fusion yield yet, of 1015 neutrons, and Moses said that his team was “on the verge” of showing ignition with energy gain. “Fusion is not the issue; gain is the issue,” said the NIF director, adding that another 1000-fold increase in neutron yield was required.

If and when gain is demonstrated, laser fusion will suddenly look much more viable, adding considerable weight to calls for it to be harnessed to meet the energy needs of the future – and the UK should have a major role to play. 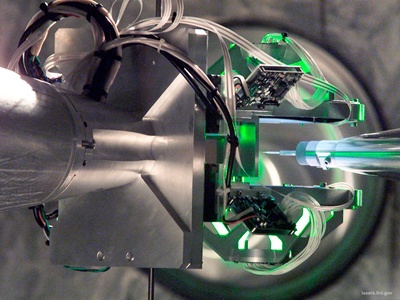 In CLF’s Vulcan and AWE’s Orion, the country is already home to some of the world’s most powerful lasers, and has wide-ranging expertise in the technologies required for laser fusion – for example the optics company Gooch & Housego is just one of a number directly involved with NIF, as well as a historic strength in high-power diode lasers. The FTSE-listed company AMEC, whose director of reactor building Alain Chevalier spoke at the Royal Society meeting, has long-standing expertise in nuclear power station construction and Chevalier says that there are clear synergies with the laser fusion approach.

The development of cheap, very-high-power laser diodes is a key requirement for laser fusion energy to become a viable technology. NIF, designed more than a decade ago, uses huge flashlamp-pumped Nd: glass lasers to heat its fusion target. The laser diode field has been transformed since then, however, meaning that the required system size could already be scaled down by a factor of ten, while a future laser system for fusion energy could conceivably be transported by truck to its site inside what Moses calls “a beam box”.

One of the key technical challenges will be to produce sufficient power from cheap diodes, as well as adapting the NIF design so that fusion with gain occurs at a rate of about 10 Hz (for example by dropping fuel pellets into the reaction chamber). But Moses now believes that it is the non-technical elements that pose the major challenges – such as licensing and legal issues, as well as convincing the general public that nuclear fusion is different to nuclear fission, and inherently safer.

Ultimately, the pay-off could be huge - if laser fusion energy can be harnessed, just 600 kg of water could provide energy equivalent to 30 tonnes of uranium oxide, or two million tonnes of coal.

Michio Kaku on the energy mix and laser fusion potential: