No sign of a macro-economic crisis as the laser giant registers an uptick in revenues, order entry and profitability.

On a day when macro-economic worries rattled stock markets around the world, the share price of Rofin-Sinar was one of the few to hold steady after the laser company reported record quarterly figures and said that it expected the next two quarters to remain solid. 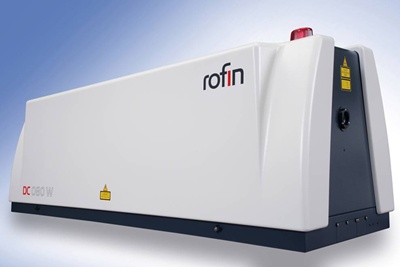 With robust demand from automakers in the US and increased sales into machine tool and electronics manufacturing applications, Rofin posted sales of $154.9 million for the quarter that ended June 30, up 40% year-on-year.

CEO Günther Braun, understandably pleased with the results, noted that the company also posted a record-breaking order entry in the quarter (of $163 million), and now boasts its highest ever order backlog – at $177.5 million. “The next two quarters should be pretty solid,” said Braun, despite the continued stream of bad economic data that is dominating the news.

On the bottom line, Rofin reported a pre-tax profit of $22.2 million for the quarter, up from $14.7 million in the equivalent period of 2010. The company also added 89 staff, bringing its employee headcount to 2059 as of the end of June.

Rofin’s sales remain broadly split between high-power, macro applications dominated by CO2 lasers (41% in the latest quarter) and micro applications in electronic and medical markets (49%), with component sales making up the balance.

Fiber laser orders up
But Braun also pointed to an upturn in orders for its fiber lasers as a positive development. At the LASER World of Photonics event earlier this summer, Rofin showed off its compact 3 kW fiber laser, which is part of a high-power product line-up designed to compete with the market leader IPG Photonics – from whom Rofin still buys some of its fiber sources.

Braun said that fiber lasers represented 11% of Rofin’s overall laser sales in the latest quarter, equivalent to $10.8 million and only a small sequential rise. But the CEO also noted that fiber laser orders in the quarter had risen sharply to $16 million, although he did not divulge the split between low-power and high-power products.

The company is clearly confident of its prospects in fiber lasers, and is sinking much of its research and development spending into this area. Rofin has also purchased a cleanroom in Finland where it will manufacture fiber lasers, although it is still waiting for some manufacturing tools to be delivered to the site before it can become operational.

“Fiber lasers have gained momentum,” Braun said, adding that there had been positive feedback from customers looking to use fiber lasers for cutting applications – now seen as the key growth market after good penetration of welding applications. “We need to ramp up production capacity to fulfil demand.”

Returning to the portents of macro-economic doom weighing on Europe and the US at the moment, Braun admitted that the evidently very strong demand for Rofin’s lasers was in stark contrast to the worrying picture that continues to dominate news headlines. “We cannot blame European industry,” he said. “We saw really good order entry in Europe and have had orders from France, Spain, the UK, and Germany.”

For the next quarter, which will bring Rofin’s fiscal year to a close, the company is expecting a slight sequential increase in sales, to between $155 million and $160 million – meaning that full-year sales should end up in the region of $585 million. The immediate investor reaction to that forecast appeared positive – Rofin’s stock was virtually unchanged in early trading after the August 4 announcement, while both the Dow Jones and Nasdaq indices had shed around 3% of their value.