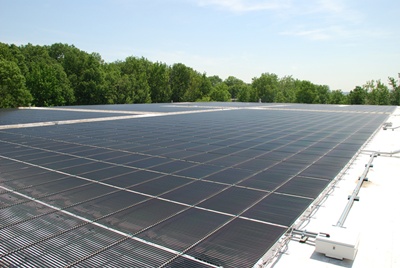 As Solyndra – the California-based pioneer of cylindrical copper indium gallium diselenide (CIGS) photovoltaic modules – becomes the latest casualty in the battle to survive the solar industry shake-out of 2011, eyes will again turn to the $535 million Department of Energy (DOE) loan guarantee that is already subject to an investigation.

The company said on August 31 that the combination of a weak global economy and cut-throat competition in the solar industry had conspired to force it to suspend its manufacturing operations. As a result, around 1,100 full-time and temporary employees are being laid off, effective immediately.

As it prepares to file for Chapter 11 bankruptcy, the company says that it is evaluating future options, including a sale of the business, as well as licensing the novel CIGS technology and its manufacturing expertise.

Solyndra is the latest victim of a shake-out caused by the sharp price declines that have hit the solar industry since the start of the year. That trend was precipitated by reductions in feed-in tariffs and policy uncertainty in key European markets, as well as huge increases in silicon cell manufacturing capacity in China, which have led inevitably to a huge oversupply of modules and panels this year.

On August 15 another US solar company, Evergreen Solar, also filed for Chapter 11 bankruptcy reorganization, with Intel-backed SpectraWatt following suit on August 19. Aside from being based in the US, what all three companies have in common is a novel technology that has proved difficult to scale – while at the same time Chinese producers backed by the country’s central government have scaled up massively. 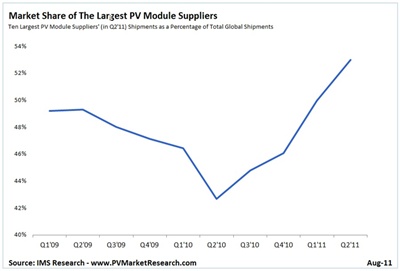 Chinese dominance
Illustrating the growing dominance of those Chinese suppliers, the latest PV module supplier report from analyst company IMS Research shows that the three leading suppliers in the second quarter of 2011 were Suntech, Yingli and Trina Solar – all based in China.

Despite facing the same difficult economic conditions cited by Solyndra, those three companies collectively grew shipments by 20% over the first quarter of the year as customers facing reduced financial incentives migrated to modules being sold cheaply because of the oversupply.

In its report, IMS says that although many suppliers were able to maintain or even increase their PV module shipments in Q2’11, fierce competition led to rapid price reductions from all suppliers throughout the quarter. As a result, industry revenues, profits and margins have all declined.


Indicating the consolidatory trend within the industry, IMS adds that the world’s top-ten solar module suppliers now account for more than half of the market, in terms of unit shipments. That figure has increased steadily over the past year.

'Doomed to failure'
While the thinking behind Solyndra’s DOE loan guarantee will now come under further political pressure – two Republicans on the House of Representatives’ Energy and Commerce Committee immediately released a statement saying that they “smelled a rat from the onset” – the writing has been on the wall for Solyndra ever since the company was forced to ditch its planned $300 million IPO last summer.

As reported by optics.org shortly afterwards, a shake-out among CIGS module suppliers was already looking inevitable, with Lux Research analyst Jason Eckstein predicting at the time that Solyndra was doomed to fail, unless it could quickly find a way to reduce costs or improve conversion efficiencies. And after failing to secure the level of finance necessary to complete its manufacturing scale up, the company’s fate was effectively sealed.

As the House investigation into Solyndra’s DOE loan guarantee continues, the Chapter 11 bankruptcy proceedings may allow some part of the company or its technology to be picked up by an interested party. But with the company having pursued a unique technology and manufacturing process since being founded by former Applied Materials executive Christian Gronet in 2005, and continued pressure on PV module prices, even that outcome would appear unlikely at this point.

“Despite Solyndra operating its 110 MW facility close to full capacity in recent months, we estimate that its manufacturing costs still far exceeded the price at which it had to sell its modules in order to make an investment case for its customers."

“It was losing money fast, and for that reason the closure really comes as no surprise. Whether further capacity expansion, increased production and a few more years of technical advancements could have changed the situation is debatable, but now we will never know,” added Wilkinson.

On the political implications of the development, IMS warns of the consequences in the US, saying: "The company had been awarded a US DOE loan guarantee amounting to over half a billion dollars, which was already considered controversial after it closed its first fab and cut jobs in 2010, provoking some investigation into the loan approval process. This sum can now be added to the US government’s huge debt."