Solar and optoelectronics technology firm OPEL Solar International has changed its corporate identity in a move designed to reflect its expertise in two distinct photonics sectors. 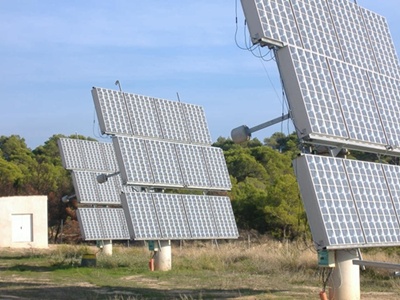 The holding company is now trading on the Toronto Venture Exchange under the name “OPEL Technologies, Inc.”, acting as parent to both its photovoltaics business unit OPEL Solar, and OPEL Defense Integrated Systems (ODIS), which is developing an advanced semiconductor process with initial applications in aerospace and defense.

At the moment, OPEL Technologies derives the bulk of its revenues from sales of advanced trackers used in PV installations to maximize their energy output throughout the day – both for conventional silicon-based panels and the emerging market for concentrated PV (CPV) systems.

In the company’s latest financial quarter, reported just before the name change, OPEL registered overall sales of $1.2 million, bringing first-half revenues for 2011 to $2.7 million – more than three times higher than the first half of 2010. $2 million of those 2011 sales relate to OPEL Solar (up from only $0.2 million a year ago), with the remainder resulting from ODIS' development projects.

The company has long been involved with the US defense community – in fact, says Pierhal, OPEL was originally founded with the main intention of developing a gallium arsenide (GaAs) process technology for RF and optoelectronic applications, before diversifying into PV systems and trackers as a means of generating revenues.

“Our solar business is going tremendously,” said the CEO. “We have orders on the books that are going to be phenomenal for the end of this year and going into next year – from China and other locations.” The level of purchase orders is understood to be in the region of $6 million currently.

Aside from selling trackers, OPEL also sells PV systems and modules, and it is in the process of completing a 446 kW turnkey installation at Toray Plastics in Rhode Island – believed to be the largest “solar field” yet constructed in the tiny US state.

But trackers is OPEL Solar’s key revenue driver. The company’s system is said to be intelligent and adaptive, suitable for use with both flat-plate and concentrated PV systems. “What has happened is that 70-80% of the revenue coming in relates to trackers,” Pierhal said. “The flat-plate companies are coming to us in leaps and bounds.”

Monetizing GaAs process
On the defense side of the business, ODIS is working on a high-electron mobility transistor (HEMT) design that has now been validated by project partner BAE Systems, and is looking at how to monetize a decade-long development effort on POET led by Geoffrey Taylor, ODIS’ chief scientist.

Although the initial POET work has focused on transistors, including complementary n-channel and p-channel implementation (enabling a digital GaAs process technology analogous to silicon CMOS), the fabrication process is also said to be highly suited to optical applications. Those could include infrared sensing, single-chip designs combining lasers with electronic control, and the production of high-power beams from arrays of closely spaced lasers.

As an example, ODIS has verified a strained-InGaAs quantum well VCSEL design, and has also demonstrated quantum dot structures operating at 1330 nm, while Taylor believes that with a slight adjustment to the process a 1550 nm design can be produced. That has been done by other organizations – notably QD Laser in Japan, which will manufacture around 1 million chips in 2011, according to O + P plenary speaker Yasuhiko Arakawa – but the difference with POET is that the laser could be integrated with a range of other active and passive devices in the form of an optoelectronic integrated circuit.

Although the approach sounds similar to that of the InP-based photonic integrated circuits (PICs) produced by the California company Infinera, a key difference is that GaAs is a much more mature semiconductor material. Taylor adds that POET combines GaAs transistor and optoelectronic functionality, unlike typical PIC processes.

Thus far, ODIS’s key customer has been the US Air Force, but now the company is looking towards developing commercial applications. High-speed optical interconnects would be one potential application area for the technology, since all of the optoelectronic and digital circuitry could potentially be integrated within the same chip architecture.

ODIS was actively promoting the potential of the integrated technology platform at the SPIE Optics + Photonics event in late August through two technical presentations, focused on modulator designs and optoelectronic switching.