Orders up at Photonic Products and LightPath 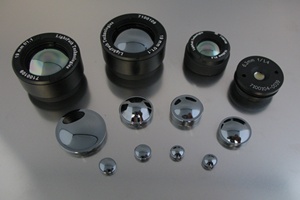 Photonic Products Group (PPG) and LightPath Technologies – who both make a variety of optical components and assemblies – have reported growing order books as their management teams seek to grow the companies in an uncertain market.

PPG, which comprises the INRAD, Laser Optics and MRC Optics brands, said that bookings in the latest quarter reached $3.48 million – more than double the amount that it had registered one year ago. In the first half of this year, bookings of $6.18 million are up 46% on the first half of 2010.

Meanwhile Florida-based LighPath, which manufactures precision-molded aspheric optics and other components aimed at a wide variety of applications, said that its 12-month shippable backlog was up 9% sequentially at $3.9 million, $1 million higher than in June 2010, as it ramped output.

LightPath CEO Jim Gaynor said that the business was growing steadily but fighting significant price pressures. “Our production continues to ramp up output, producing a record of over 549,000 lenses during the fourth quarter (ended June 30), and our unit volume for the year was up 47%,” he added.

Unfortunately for LightPath, the downward pressure on component prices has meant that its revenues have not reflected that increased production. At $2.78 million,its latest quarterly sales were up 14% sequentially but very slightly down compared with the same period of 2010.

However, full-year revenues were 8% higher than fiscal 2010, reaching $10 million, while Gaynor pointed to fourth-quarter 2011 orders of more than $3.3 million and the receipt of larger-scale orders yielding better visibility as a sign of strength as the company enters what is traditionally the weakest period of the year.

Over at PPG, CEO Joe Rutherford is focused on improving the company’s balance sheet by paying off $675,000 in convertible debt interest. The company posted second-quarter revenue of $3.22 million, up 49% year-on-year. As a result, the New Jersey firm’s net loss narrowed considerably, with PPG showing a loss of only $96,000 on the bottom line, compared with $649,000 over the equivalent period last year.

That improvement has stabilized PPG’s cash position at around $4.3 million, which Rutherford is happy with. “I continue to be optimistic that the company is poised for continued growth and profitability,” said the CEO.