Fewer MOCVD reactors will ship in 2011 than previously expected, but that should help with the current oversupply of LED chips. 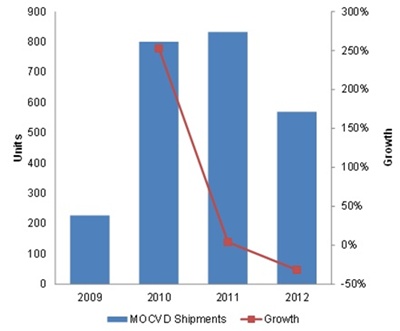 The sharp downward pressure on prices of high-brightness LED chips should start to ease after manufacturers pushed out a number of planned installations of production equipment originally scheduled for 2011.

Ross Young from the analyst company IMS Research, who closely monitors shipments and sales of the metal-organic chemical vapor deposition (MOCVD) tools that are the key pieces of equipment determining production volumes, says that there has been a significant slowdown in tool adoption recently.

Young now expects 833 MOCVD reactors used in GaN device production to ship in 2011 – down nearly a quarter on his previous estimate. That has been prompted by slower demand growth from displays companies for LED backlighting applications, which has in turn caused a build up of inventory in the supply chain and depressed LED prices in general.

Recent results from the LED maker Cree, which is not a major supplier for backlighting but nevertheless has seen its profitability take a dive, and Rubicon, which is now seeing a sharp reduction in prices of the sapphire wafers that it sells to LED producers, have illustrated the challenges facing manufacturers.

Tight credit
“With growth slowing, margins shrinking, the oversupply worsening and credit in China tighter than expected, LED manufacturers have pushed out a significant number of installations in 2011, resulting in a surprisingly large MOCVD shipment downgrade,” reports Young.

The 833 figure still represents growth of 4% over the 2010 total, which marked the onset of the current boom cycle as MOCVD tool shipments quadrupled from the level seen in 2009. Next year, demand for the tools will be significantly lower, says Young, although the expected 569 shipments would still represent a strong year historically.

The slower rate of capacity growth should also help with the current oversupply and stabilize pricing, benefiting the profitability of LED manufacturers in the near term.

Demand for the tools is still being driven primarily by China, despite the tightening credit and changes to the way in which subsidies for MOCVD equipment are provided. Even so, Young predicts that new LED manufacturers in the country will receive more than 100 tools next year.

Partly because of the sharp reductions in LED selling prices witnessed in recent months, IMS had already reduced its market forecast for GaN-based LEDs this year. In June, it predicted that the market should be worth $8.7 billion this year, up only 4% from 2010.

Chinese winners?
While dozens of potential LED manufacturers have emerged in mainland China recently thanks to government subsidies on offer in the country, none of those companies currently ranks among the global leaders in LED technology. Aixtron, the leading supplier of MOCVD equipment, said recently that it now expected the subsidies to be channeled towards only a handful of companies, as China seeks to produce some leading players that will ultimately compete in the top tier of LED manufacturers.

But Young points out that there has been a knock-on effect from the subsidy program outside of mainland China: “The subsidies are helping Taiwan manufacturers who are establishing joint ventures in [mainland] China, boosting their cost competitiveness and allowing them to grow their capacity faster than they may have otherwise,” he told optics.org. “Taiwanese companies taking advantage of these subsidies include AOC, Epistar, Forepi, Genesis Photonics, Lextar, SemiLEDs, Tyntek, ULED and more.”

From the ranks of Chinese LED manufacturers, Young picks out San'an, Elec-Tech, HC Semitek and Shanghai Bluelight as potential leaders in that country, while PN Stone, GCL Opto and Lattice Semiconductor are also emerging as contenders. Lattice has been working on a novel approach to drive down LED cost by depositing GaN on silicon wafers – with the company’s significant purchases of MOCVD tools recently suggesting that it is bringing the technology close to full production.