Illinois spin-out with backing from Siemens tops up first tranche of series C funding round with additional debt finance.

Semprius, the University of Illinois spin-out with a novel semiconductor fabrication process, has raised $23.3 million through a combination of series C venture financing and debt.

The company, which is now based in Durham, North Carolina, says that it will use the funds to build a pilot manufacturing facility producing high-concentration photovoltaic (HCPV) modules.

Led by Siemens Venture Capital (Siemens owns a 16% stake in the company), the latest round of equity financing aims to raise $30 million in total. Semprius has so far raised $20.6 million in the first tranche, according to its filing with the Securities & Exchange Commission (SEC), with the balance expected to be closed soon as additional investors complete their due diligence. In a separate filing, the company disclosed that $2.66 million had also been raised via debt financing, up from $0.9 million initially agreed last year.

The CPV market remains at an early stage, but has gained some commercial traction this year, with several hundred megawatts worth of installations in the pipeline over the next few years. Analysts have predicted that 1 GW could be installed annually by 2015, with Semprius CEO Joe Carr quoting expectations of 6 GW by the end of the decade.

Crowded market
Greentech Media, which recently produced a report on the status of the sub-sector, has identified no fewer than 40 venture-backed companies targeting the emerging CPV market in some way, in addition to more advanced and publicly listed companies such as Amonix, Soitec and Emcore.

Semprius’ differentiation relates to the low-cost semiconductor transfer printing process that it uses to make high-efficiency cells (NREL has certified best-performing devices in excess of 40% conversion efficiency), and also its ability to combine the cells with low-cost optics delivering a concentration of more than 1000 suns. 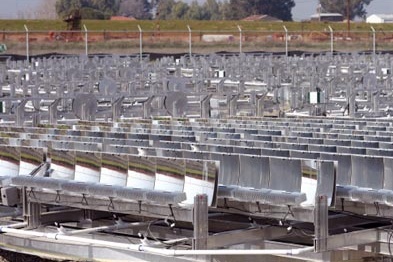 More funding for Greenvolts
Meanwhile another early-stage company targeting the CPV space, this time California-based Greenvolts, has added significantly to its capital reserves by raising an additional $16 million, lifting its total series C funding to $39 million. When added to previous rounds, it brings the total equity invested in the company so far to around $84 million.

Greenvolts is now run by former JDSU executive David Gudmundson, who was previously the president of the company’s optical communications product group before joining the start-up as CEO in October 2009. Fremont-based Greenvolts is a close neighbor of JDSU’s Milpitas headquarters in Silicon Valley.

The company claims to have proprietary high-concentration optics, and in the past its founder Bob Cart has described its distinguishing features as using parabolic mirrors to focus sunlight, and a novel lightweight tracker system that does not require a concrete base.

However, according to the PV industry blogger Ed Gunther, that technology has since been replaced by an updated system under a 3 MW power agreement with the Pacific Gas & Electric utility company.

* This article was updated June 30.