Industry analysts at Solarbuzz say that shipments in the second quarter of 2011 were far weaker than had been projected. 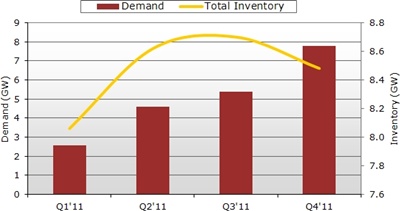 US-based solar industry market research company Solarbuzz is now expecting the global market for photovoltaic modules to grow only 5% in 2011, with weak demand so far this year causing a huge build-up of inventory in the supply chain.

But with reduced incentives in key European markets this year, initial estimates from Solarbuzz suggest that module shipments in the second quarter were far weaker than manufacturers’ expectations. The analyst firm says that there is now 8.6 GW worth of modules registered as inventory, with the growing excess of supply prompting a 16% drop in module prices since January 2011.

“The PV industry is braced for a challenging second half of 2011,” said Solarbuzz in a release announcing its latest quarterly report. “The manufacturers’ bullish stance that sustained production and shipments will grow to reach supply levels 1.4-1.7 times larger than 2010 contrasts with the forecast that the end market will grow only 5%.”

Lower prices generate demand
Driving the market in the second half of the year will be further price reduction, with Solarbuzz president Craig Stevens saying that second-tier manufacturers in Asia are already putting “enormous” pressure on rivals to follow suit. Even with the significant cutbacks in production, for example the manufacturing slowdown previously announced by top-tier cell supplier Q-Cells, Stevens reckons that by the end of 2011 module prices at the factory gate will have shown a year-on-year decline of 25%.

While bad news for manufacturers, that price decline will help to justify government decisions to reduce subsidy levels, and will kick-start the PV market for a strong finish to 2011. Solarbuzz now expects that 65% of full-year demand will materialize in the second half – equivalent to around 13 GW. But with 8.6 GW already stuck in the supply chain, production is likely to remain subdued as module suppliers look to offload.

“Rather then further procurement, most downstream companies are currently focused on reducing inventories in order to avoid write-offs emanating from the collapse in prices,” said Solarbuzz.

The firm’s analysis echoes a recent PV market update from Bloomberg’s New Energy Finance division, which said that module producers are preparing for a “painful” period of consolidation as the market adjusts to the lower levels of subsidization. Its analysts believe that several players will leave the industry amid fierce price competition.

But that competition will mean that in sunny locations the cost of power generation from large PV installations could drop to around $0.18 per kilowatt hour – still a long way from the US government’s “SunShot” target of just $0.05-0.06 per kWh to be directly competitive with conventional fuels, but comparable with daytime energy prices in some parts of the world, for example Italy.

Early signs
Signs of the impact that those price declines will have throughout the supply chain are already appearing, with Suntech Power – ranked as the world’s largest producer of crystalline silicon solar panels – terminating a ten-year wafer supply deal with MEMC only halfway through the agreement, and at a cost of more than $200 million.

The two agreed the contract in 2006, but the additional 4.6 GW of wafers that Suntech had expected to purchase from MEMC between now and 2016 would have cost far more than current market prices would suggest. As a result, Suntech says that by cancelling the deal and sourcing more silicon wafers both on the open market and internally it will save more than $400 million overall.

And in an early sign of the forthcoming consolidation, the leading cell producer JA Solar is set to acquire a wafer producer called Solar Silicon Valley, in another move that will increase vertical integration. Solar Silicon Valley is currently owned by a holding company that is largely controlled by the JA Solar chairman Baofang Jin, and its capacity of 485 MW will boost JA Solar’s internal supply to 785 MW.