With strong growth across the business and Raman applications gaining commercial traction, the UK firm acquires a huge new site. 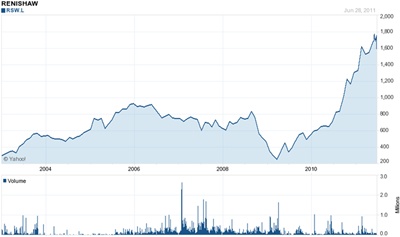 The UK-headquartered metrology and analytical equipment company Renishaw is eyeing a major expansion of its operations, thanks partly to the success of its photonics technologies.

On June 24 the company exchanged contracts to acquire a large manufacturing facility in Miskin, Wales, that is soon to be vacated by its current owners Bosch as part of a relocation. That deal will be completed on September 30, while Renishaw is also hoping to extend three of its existing facilities in nearby Gloucestershire, England, including its New Mills headquarters.

The company, which produces a range of optical metrology tools and Raman spectroscopy equipment, told optics.org that the expansion represents planning for the long term. And although it will not immediately fill up any of the new or extended facilities, ultimately the moves could give the company nearly 800,000 square feet of additional manufacturing space.

According to Renishaw’s group marketing services manager Chris Pockett, the company has seen demand for its products – used in applications as diverse as pharmaceuticals manufacturing, brain surgery and the manufacture of wind turbines – surge as a result of industrial demand bouncing back from the global financial crisis, driven in particular by China.

Renishaw’s announcement coincided with the visit of Chinese premier Wen Jiabao to the UK, and the country now accounts directly for 22% of the company’s sales. On top of that, says Pockett, are many more indirect sales relating to high-end machine tools that Chinese firms ultimately buy, as the country increasingly looks to move into higher-value manufacturing.

Semiconductor and LEDs push demand
Pockett adds that Renishaw has benefited from the rising global demand for LEDs used in TV backlights and general lighting, as well as the year-long boom in the silicon semiconductor industry. Its laser calibration tools and optical position encoders are used in key processes such as wafer dicing and lithography, for example.

Although the company is yet to decide exactly what it will produce at the 193-acre site in Miskin, and is cautious about raising expectations there after the local economy was dealt a huge blow by the Bosch reorganization, Pockett expects “hundreds of jobs” to be created at the facility over several years, mainly in manufacturing.

One of Renishaw’s recent success stories is the company’s suite of Raman-based analytical products, with Pockett stating that “the time for Raman has now come”. Raman applications were the only part of the Renishaw business to continue growing in the immediate wake of the global financial crisis. As a result of that and continued strong demand, Renishaw’s Raman team - officially part of the company’s healthcare division but in reality also serving a number of applications across science and industry - is now running out of space.

The company is expecting great things from its emerging Renishaw Diagnostics division in Glasgow, formerly the University of Strathclyde spin-out D3 Technologies and an expert in trace-level detection using surface-enhanced Raman techniques. Outside of healthcare, Renishaw also sees emerging quality control applications for Raman spectroscopy in grading of solar cells and rapid mapping of pharmaceutical tablets. 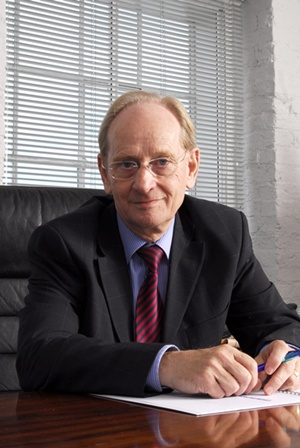 Profits up 400%
The rate of expansion – Renishaw’s total revenues increased 75% in the second half of 2010, with associated profits up more than 400% - has highlighted the difficulty in recruiting skilled production and manufacturing engineers, as well as those with optics expertise. Although Gloucestershire is a largely rural part of the UK, competition from well-known engineering firms in the local area includes such brand leaders as Airbus, Rolls-Royce, BAE Systems and Dyson, among others.

As a result, Renishaw is still trying to fill some 200 vacancies at its main R&D and manufacturing site, and since the company has traditionally invested 18% of its annual sales in R&D spending, more jobs for researchers will be on the cards.

The company’s chief executive, Sir David McMurtry, summed up the opportunities and challenges facing Renishaw in a statement announcing the planned expansion:

“This is an exciting time for Renishaw, but our rapid growth has presented real challenges with space, both to accommodate new equipment and the numerous people that we are currently recruiting for all aspects of our business,” he said.

“The new site acquisition and proposed expansions to our Gloucestershire facilities are a necessary part of ensuring for the longer terms that we can continue to prosper and create high-quality jobs in the UK.”

• Shares in Renishaw plc rose steadily on the London Stock Exchange after the company revealed the expansion plans, and stood at a long-term high of around 1771p in early trading on June 29, equivalent to a market capitalization of just under £1.3 billion.