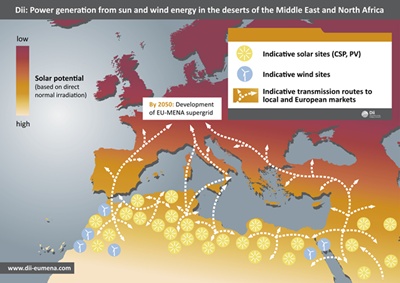 The Moroccan Agency for Solar Energy (MASEN) has taken a step towards setting up a domestic concentrated photovoltaics (CPV) industry supply chain, following a development deal signed with the French company Soitec.

Soitec’s Concentrix subsidiary is recognized as one of the lead players in the emerging CPV sector, while the North African sunbelt region provides some of the best conditions for the technology anywhere in the world.

Under the terms of a memorandum of understanding, this project will represent the first utility-scale solar project developed under the Mediterranean Solar Plan (MSP) – a scheme that is aiming to deploy 20 GW (peak) of solar generating capacity in the region by 2020.

Two pilot projects form the central part of the agreement, with each set to provide a peak output of 5 MW. As well as gaining knowledge by working on the pilot projects and receiving training from Soitec, one of the key aims for MASEN is to develop a local supply chain for CPV system components, including the two-axis trackers required to closely follow the sun across the sky. The project partners will also look at the possibility of setting up a PV module assembly facility in Morocco – as Soitec already plans to do in San Diego, US.

The first of the 5 MW pilot plants is to be built at MASEN’s Ouarzazate site – where tenders for 500 MW of renewable energy production were issued last year – and is scheduled for completion in early 2012, says Soitec. The second pilot project will feature “next-generation” CPV modules, at a site that is yet to be agreed.

Solar exports
Ultimately, the project aims to export at least some of the electricity generated by the plants, something that is part of the wider aim of Morroco’s own solar plan. A power grid connection already exists between Spain and Morrocco, and the development of CPV generation could become one of the first tangible realizations of the “Desertec” concept for large-scale export of renewable electricity from desert regions – using both solar and wind power.

The long-term vision for Desertec is to deliver 15% of the European Union’s energy demand in this way by 2050, although plans are at an extremely early stage and a hugely expensive build-out of grid connection architecture would be required to make the scheme feasible.

CPV, which holds cost advantages over regular PV in areas of high direct solar irradiation, particularly in hot, dry climates, accounts for only a tiny fraction of the wider PV market right now, but judging by recent announcements is beginning to gain a foothold. Soitec has announced the largest projects to date, with potentially 300 MW of peak capacity set to be installed in the San Diego region of California, while analysts at Greentech Media and Strategy Analytics are anticipating a sharp ramp in demand from suitable locations over the next few years.

André-Jacques Auberton-Hervé, the Soitec CEO, said of the Moroccan plan: “Our technology is in the process of being adopted on a large scale in the San Diego region, where climate conditions are similar and where our technology has proven to be the best suited to regions with high sunshine.”

“We are working very closely alongside MASEN on the rollout of solar power plants in Morocco and to promote the economic development of the region.”

MASEN has also recently signed a development agreement with the Desertec Industrial Initiative (“Dii”), a joint venture group set up by private industry that is aiming to catalyze the implementation of Desertec across North Africa and the Middle East. Founded in Munich in 2009, it lists the Fraunhofer and Max-Planck societies among its 50 members.

Although CPV technology is yet to fully prove itself commercially, its suitability for utility-scale energy production could in principle make it a significant element of any long-term plans to build large solar farms in desert areas with a view to feeding the electricity generated into a grid to serve large and distant populations.