President wants to see more home-grown US engineers, and holds up LED maker Cree as an example of skilled job creation. 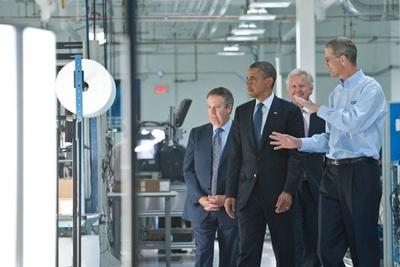 US president Barack Obama has highlighted the importance of the photonics industry for job creation and future economic prosperity with a visit to the North Carolina LED manufacturer Cree.

Obama was touring Cree’s headquarters and manufacturing facility for the second time – he previously visited during his presidential campaign in 2008 – as it had been selected to host the second meeting of his “Jobs and Competitiveness Council”, a group of executives headed by GE’s Jeff Immelt that is tasked with creating a million new jobs in the country.

Since Obama’s first trip to Cree the LED industry has made giant strides to improve the efficiency of semiconductor-based lighting, with Cree at the forefront of that work. CEO Chuck Swoboda told Obama that Cree had doubled the efficiency of its emitters during that time.

In that time it has also hired nearly 750 new employees, with 180 jobs for scientists and engineers, giving Obama a platform to announce a new scheme under which his Jobs Council aims to train 10,000 new US engineers every year. Intel’s CEO Paul Otellini is heading up that effort, which is regarded as crucial to maintaining the competitiveness of the US in the high-technology sector.

“These are the jobs of the future,” said Obama, highlighting that companies such as Cree find it difficult to fill such positions because of the relative lack of technology and engineering graduates with the necessary skills. “These are the jobs that China and India are cranking out. They understand if they get those skills they can find a good job, they can create companies, they can create businesses, create wealth. And we’re falling behind in the very fields we know are going to be our future.”

Political angle
Obama’s visit to Cree clearly had a strong political motive – the president has come under fire from opponents because of the stuttering economic recovery in the US and its impact on job creation, while North Carolina is both a swing state and a relatively poor one overall, with one of the highest unemployment rates in the US.

But the president also talked up the potential of two photonics technologies, in the form of LED-based lighting and solar energy, as key elements of a high-tech, energy-efficient focus on future economic development.

“At Cree, you’re putting people back to work in a field that has the potential to create an untold number of new jobs and new businesses – and that’s clean energy,” he said in a speech addressing company employees. “My administration has invested heavily in clean energy manufacturing, because I want to see the LEDs and solar panels and wind turbines and electric cars of tomorrow made right here in the US.” Cree has itself benefited significantly from the Obama administration’s support, receiving a $39 million tax credit as part of the Recovery Act.

As well as generating new employment, those energy-efficiency technologies could save US businesses around $40 billion per year on their utility bills, added Obama – further enabling greater spending on job creation.

Obama’s visit to Cree came just a week after US Energy Secretary Steven Chu’s trip to another gallium nitride LED maker, the Russian company Optogan, to explore the potential for US-Russian collaboration on new energy technologies.

Optogan is at a much earlier stage of development than Cree, which is again embarking on a major expansion and transferring LED production to a 6-inch wafer platform to further improve manufacturing efficiencies. But as the only Russian company able to manufacture LEDs in volume currently, it stands to benefit from a rapidly growing domestic market.

• Meanwhile, another US photonics company – this time Schott Glass of America - has been visited by a politician in the past week. Republican congressman Lou Barletta toured Schott’s optical glass production and research and development facilities in Duryea, Pennsylvania, on June 9. The site produces high-end optics, including specialty glass used in ultra-high-power laser systems, with Barletta also highlighting the high-tech sector jobs created by the company.