A large order in support of ASML lithography systems positions EUV as a major impetus for future growth. 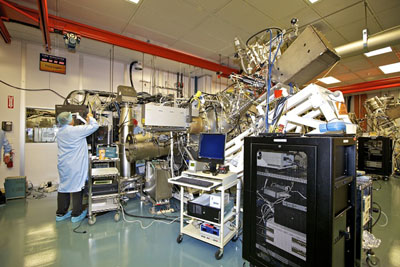 The first quarter of 2011 was described as very productive by Cymer CEO Bob Akins, who reported that the company's total quarterly revenue was $154.4 million, compared to $146.9 million for Q4 2010. Net income slipped from $32.9 million to $28.8 million for the same periods, but showed a healthy year-on-year increase compared to the $16 million the company reported for for the equivalent quarter of 2010.

"Cymer increased shipments in the first quarter despite seasonal slowing, and delivered 50 light sources," Akins told investors. "The Japan earthquake and tsunami affected our supply chain only slightly and caused very minor disruption to our business."

The company also completed the acquisition of eDiag Solutions, a Seoul-based provider of software for lithography source performance analysis and data mining. The purchase was presented as a logical complement to Cymer's OnPulse service and support platform.

Extreme UV (EUV) is set to play the increasing role in Cymer's fortunes, a prospect described by Akins as the pay-off for nine years of work on EUV by the company.

"We are making a long-term strategic investment in support of EUV technology, and you can expect to see an ongoing increase on a quarterly basis throughout the year," he said. "Cymer intends to end the year with a total of 300 people working in our EUV organization, almost doubling the number working on it today."

EUV challenges
Akins indicated that the majority of the company's R&D spend was now focused on EUV sources. Cymer's technology employs laser-produced plasmas, where EUV radiation is generated when a high-power laser pulse hits droplets of tin metal, and Akins gave an insight into the technology challenges that are being tackled.

"The top issues are: power; the ability to deliver the light in a highly controlled dose; and keeping the collector clean," he said. "We have previously disclosed that Cymer uses a hydrogen buffer-gas background to decelerate the high-speed ions that come out of the plasma, and keep them from eroding the collector and its multilayer reflective coating. There is also a high-speed H2 flow to help keep atomic tin away from the collector surface. We have made significant improvements in collector protection and lifetime, and can now measure the lifetime of the collector in hundreds of hours of operation. Cymer has an aggressive roadmap to increase this lifetime further and reach several more hundreds of hours by the end of the year."

Akins also explained that Cymer's strategy will be to upgrade the company's 3100 and 3300 EUV sources after delivery, to reach their full performance levels. "We are already installing the first couple of 3100 systems at chip makers, and they will see upgrades to reach their full target 100 W performance over time," he said. "When The 3300 source begins shipping next year it will be delivered at the 3100 100 W power level, and then be upgraded over time to the full 250 W. That will be the process followed for these two generations of sources."

The 3300 sources represent a continuing strong relationship between Cymer and lithography systems supplier ASML. During the first quarter, Cymer received a multi-unit order worth over $200 million for EUV light sources in support of the ASML NXE:3300 lithography system, which is aimed at high-volume production of semiconductor devices at sub-20 nanometer nodes.

"Eric Meurice of ASML has been explicit that it is following a three-source supplier strategy for risk mitigation purposes, and for competitive reasons we have agreed with ASML not to be specific on the number of units supplied. So I draw no conclusions about Cymer's market share," noted Akins. "But I will say that we are pleased to get the order, and delivery will be in support of ASML's roadmap."

*Cymer shares were largely unaffected by the results, falling by 0.8% in early trading after the announcement.