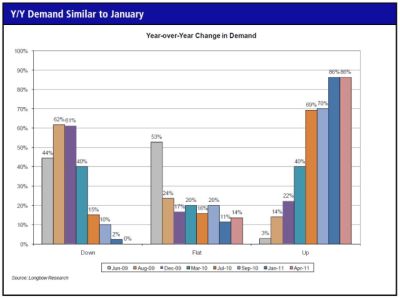 Worries that the recovery underway in the photonics sector would be significantly dented by the habitual weakness of the year's first quarter appear to have been groundless, according to the latest survey by Longbow Research.

Although seasonal cycles may have played a part in the figures for sequential demand, which revealed that 11% of vendors had experienced a decrease compared to Q4 2010 and a further 28% of respondents had seen no change, a healthy 61% of vendors were still able to report an increase.

Eighty-six percent of respondents reported stronger year-on-year demand in Q1 2011 compared to the same period of 2010, a figure unchanged from the previous quarterly survey. But significantly, the 2% who had been continuing to endure falling y-on-y demand at the end of last year appear to have turned a corner: no respondents experienced a similar decline in Q1, and only 14% reported flat demand.

"Q1 tends to be seasonally weaker than Q4, but many vendors indicated that the past quarter was better than expected," said Mark Douglass of Longbow. "End users in a variety of markets and applications are buying new systems or upgrading current equipment. Sales are strong across all power levels and laser types, including CO2, fiber, and other solid state sources. And optics sales continue to recover as industrial production picks up."

Fresh spending, to the tune of 20% growth
Douglass predicts that the bullish mood will continue, judging by both quoting activity and customer interest, and believes that year-on-year growth in the second quarter could hit an impressive 20%. With heavy buying in Q1 coming on the heels of a strong finish to 2010, the only casualty could be increasing lead times for materials and components, as inventories have been depleted.

"Extended lead times don't appear to be a serious problem for now, but the strength of the rebound has been surprising and everyone is keen to keep their inventories lean, given what happened at the end of 2008," commented Douglass. "What we are seeing is a combination of vendors continuing to take up slack after the complete lack of spending in 2009, and new business driving the need for capacity expansion. Another factor, at least in the US, is the drive for greater automation in order to realize productivity gains, although this will inevitably have a negative impact on employment."

The fresh spending has been across a variety of sectors. Longbow detected particular activity from buyers in automotive markets, with demand high from Ford and Chrysler, while some agricultural equipment plants have more than doubled the number of laser welding and cutting machines in their production facilities.

"Automotive and agriculture sectors are spending a lot on capital expenditure right now, and lasers are a good fit with their desire to run lean manufacturing operations," said Douglass. "We are also seeing more interest for lasers in aluminum applications, which generally require higher power lasers and sometimes supplemental consumables as well. Currently the auto industry is using more aluminum in production as the price of steel continues to climb, pushing demand." 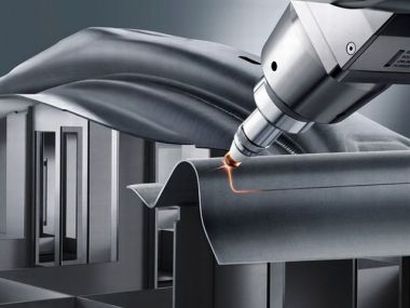 Fiber laser battle hots up
As a sustained recovery kicks in, the struggle for supremacy in the fiber laser sector will continue in earnest. Even though many fabricators continue to prefer CO2 lasers for cutting thicker-gauge steel, the growth in high-power sources including fiber lasers will outpace that of traditional systems, according to Longbow.

What remains to be seen is how vendors fare when they go up against the current dominant player, IPG Photonics. Douglass believes that competitors are clearly making headway at the sub-500 W range, but face an uphill battle at high powers when they come up against IPG's ability to drop prices.

"IPG has significant headroom to win orders on price, given its extremely strong gross margins," he said. "Trumpf's disk laser still appears to be the only real competition at the high power levels, but it seems more end users are opting for IPG. The other new entrants this year will face a challenge, not only in convincing end users that their reliability is just as good as IPG, but especially on price. But most of the significant product launches appear to be at least a few months away, so what will actually happen remains to be seen."

The good news for US vendors comes on the back of reassuring economic figures, which showed industrial production still growing rapidly. The US PMI (Purchasing Managers Index, a broad measure of economic health) was essentially unchanged at 61.2 in March 2011, down only fractionally from 61.4 the previous month are still comfortably on the right side of the crucial 50.0 dividing line, indicating an economy that is still expanding.

"The Eurozone PMI is also still pretty robust," said Douglass. "The preliminary April data shows that the EU PMI was 57.7, which indicates continued expansion. But more importantly, the bellwether for industrial production is Germany, which is still well over the 60.0 level: 61.7 in April, compared to 60.9 in March and 62.7 in February."

One factor which has not played a significant role for vendors is the aftermath of Japan's earthquake and tsunami, as Douglass noted: "Apart from an occasional component shortage, the Japanese disaster has had little impact, although companies admit that there could be some delayed second order effects in the next few months. But any disruptions are likely to be just increased lead times and slightly delayed shipments."

With the big-picture looking rosy, Douglass sees no sign that vendors' optimism is either misplaced or an over-reaction to the bruising struggles that the sector has recently been through. "There does not appear to be any over-exuberance. 2009 was not too long ago and contacts in our surveys give cautious guidance, but at present it still seems to be surprising to many vendors how robust the rebound is. Many thought that the strength of Q4 2010 was due to year-end buying, but customers kept right on buying in Q1 2011, and are still placing orders for the second quarter."