Analyst: organic PV to remain stuck in a niche

Despite a wealth of potential, organic PV will not disrupt crystalline silicon or inorganic thin-films any time soon, says Lux Research. 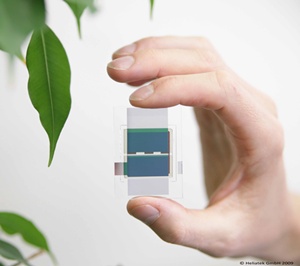 Commercial deployments of organic photovoltaic (OPV) modules will fail to live up to their hype, and remain a niche technology until 2020 at the earliest.

That’s one conclusion of a new report from the analyst and consulting company Lux Research, which specializes in market forecasts of emerging “clean” technologies such as solar power and electric vehicles.

While it does expect niche commercial applications in defense and building-integrated photovoltaics (BIPV) to emerge for the technology, Lux predicts that market growth will be extremely limited – reaching only $159 million, or 97 MW, by 2020 in its most likely scenario. The key problem is the trade-off between cost of manufacturing and module conversion efficiency – despite some perceived advantages for OPV in terms of cost:

Modeling efficiency
Mike Holman, research director at Lux and a contributor to the company’s Looking for a Future in Organic Photovoltaics report, said to optics.org: “There’s been a lot of hype for OPV, so we wanted to see if it was justified.” And although Holman acknowledges that the technology has “a ton of potential”, the problem is that the significantly lower manufacturing costs needed for OPV to become a truly disruptive technology are not likely to materialize.

In their report, the Lux analysts model the cost of OPV power generation based on conversion efficiencies of 7.5% for small-molecule OPV, and 6.9% for polymer material. Those figures are not quite as high as the 8.3% world-record OPV efficiency claimed by both Heliatek and Konarka in recent months, but Holman believes that those laboratory-generated figures will not be replicated in volume production any time soon – and that doing so with real-world products based on organic molecules will be particularly challenging.

At those kinds of conversion efficiencies, the Lux report only sees a viable pathway to a manufacturing cost of around $1 per watt for OPV by the end of the decade. “That will be no better than crystalline silicon at that point,” Holman said. At the same time, thin-film technologies will be able to offer some of the advantages claimed by OPV, such as flexibility and lower weight – but with a much better conversion efficiency.

“While part of OPV’s appeal is the hope of lower costs, we found that it won’t beat crystalline silicon or inorganic thin-film on cost per watt,” echoed the report’s lead author, Alex Carter. “As a result, developers will focus on niche applications where OPV provides other capabilities like transparency and flexibility. There will be some success, but not the disruptive impact developers are proclaiming.”

The analyst team does admit to significant uncertainty about the OPV market potential in its models, saying that it could end up anywhere between $33 million and $470 million, depending on a number of variables. But even the upper end of that spectrum would, by 2020, represent a drop in the PV ocean.

Portable power for soldiers
Applications where OPV is set find some niche success will be led by defense, Carter adds, while BIPV will represent the second-largest sector. The leading application will be to provide portable power for soldiers, so that they will need to carry fewer battery packs in the future. In fact, US soldiers already employ technologies such as “solar briefcases” – based on crystalline silicon – and flexible thin-film technologies.

However, OPV will offer further advantages: “The ease of integrating OPV into certain flexible structures and the ability to pattern it could help set it apart for some applications – like integration into tents and even uniforms – and allow it to gain some market share,” Lux said.

The analysts predict a defense application market of 34 MW in 2020, worth around $64 million and representing the biggest single chunk of the $159 million total. 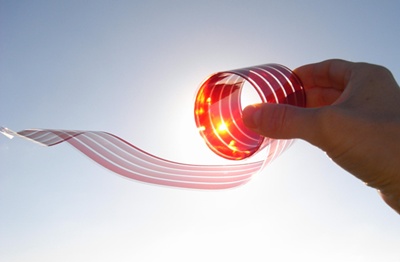 The problem for the likes of Konarka, Heliatek and others is that, even when combined with novel indoor applications such as the power-generating coffee tables proposed by UK company G24 Innovations, this will still only add up to a relatively small niche. While Holman expects lots of good OPV research and science at academic institutions and larger corporate laboratories such as BASF, Merck and Mitsubishi Chemical to continue, he does not see much of a pay-off for the specialist players any time soon.

To put the figures into context, venture investment in the US-based OPV developer Konarka has already reached the same ball-park level as the entire market size predicted by Lux for 2020. But without some game-changing improvements to conversion efficiencies that can be replicated rapidly in volume production, or new barrier film technologies to extend lifetimes without adding significant extra costs, the Lux research director does not expect OPV to have the disruptive influence that those investors are hoping for.