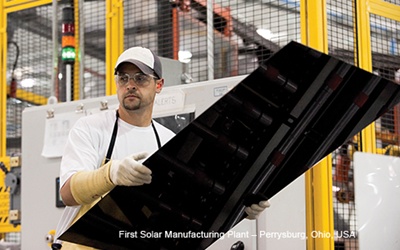 One of the biggest companies in the world is to invest $600 million to commercialize CdTe solar cells. General Electric (GE), which is more typically associated with conventional and nuclear energy technologies, has bought out PrimeStar Solar, and is planning to build a 400 MW manufacturing facility in the US.

The development should eventually provide some major competition for First Solar, rated as the world’s third-largest solar cell manufacturer in 2010, and the market leader in thin-film CdTe technology by far.

According to GE, PrimeStar – in which it has held a majority stake since 2008 – has already produced a thin-film CdTe panel with a conversion efficiency of 12.8%, as verified by the US National Renewable Energy Laboratory (NREL). Although that is only a single result at this point, the figure compares extremely well with First Solar’s average module efficiency of 11.6% - although First has previously said that it expects to improve that figure by about 0.5% per year.

“Photovoltaic solar is the next step in growing GE’s renewable energy portfolio and is part of the company’s ‘ecomagination’ commitment to drive clean energy technology through innovation and R&D investment,” said the company, which has also been developing solid-state lighting products under the ecomagination umbrella.

At 400 MW, the planned GE solar fab would be the largest in the US, and significantly larger than the 250 MW factory that First Solar is set to construct in Arizona over the next 12 months. GE’s technology was initially developed at NREL, and transitioned to PrimeStar through a co-operative research and development agreement signed in 2007. “It’s great to see technology that started at NREL ready to move into the market,” said Ryan Raffaelle, director of NREL’s National Center for Photovoltaics.

Focus on cost reduction
Victor Abate, GE’s VP of renewable energy business, said that the company’s focus was squarely on reducing the cost of solar energy: “We are addressing the biggest barrier for the mainstream adoption of solar technology – cost – and the NREL certification proves that we are on track to deliver the most affordable solutions for our customers.”

That will of course depend on how efficiently GE can manufacture the CdTe panels. First Solar recently said that it had reached a manufacturing cost of $0.73 per watt (peak), representing a decrease of 9% in just one year, from $0.80. GE said that each 1% improvement in conversion efficiency typically translates to a 10% decrease in system cost.

Even after the 400 MW fab is built by GE/PrimeStar, First Solar would remain a much larger manufacturer of CdTe panels. Its main production facilities are in Malaysia and Germany, and the company expects to have a production capacity of 2.25 GW in 2011, growing to 2.9 GW the following year.

GE did not disclose the anticipated location of its US fab, although PrimeStar already has a 30 MW manufacturing line in Arvada, Colorado. It did say that, once completed, the new fab would employ 400 people.

Abate also hinted at more solar developments to be announced in the future, and what sounds like a longer-term aim to challenge First Solar’s manufacturing scale: “This is just the first phase in a global, multi-gigawatt roadmap,” he said.

GE added that it already has more than 100 MW of commercial agreements for the thin-film products, when panels, inverters and “total solar plants” are all counted. Its largest single agreement is with NextEra Energy, to whom it will sell 60 MW of thin-film panels.