And it doesn't stop there – thanks largely to China, the SEMI industry group is expecting LED fab investment to grow another 40% in 2011. 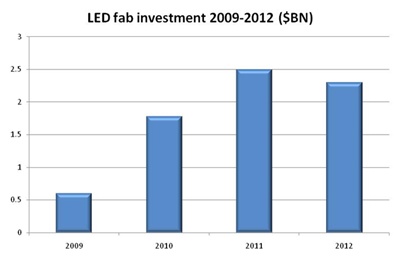 High-brightness LED manufacturing capacity is set to grow 50% this year, after an intensive period of investment spearheaded by China. That’s the conclusion of the latest Opto/LED fab forecast from the Semiconductor Equipment and Materials International (SEMI) industry group.

SEMI says that, globally, 61 new LED fabs will have become operational over the period 2010-2012, with investment money pouring into a huge scale-up in production, from the wafer and epitaxy stages through to packaging.

Last year, SEMI measured a three-fold increase in equipment spending by LED fabs, jumping from $606 million in 2009 to $1.78 billion in 2010. The organization expects further rapid growth in spending this year, to $2.5 billion, and another $2.3 billion in 2012.

In particular, China has been subsidizing the purchase of metal-organic chemical vapor deposition (MOCVD) reactors, the key piece of equipment that is used to produce the layered semiconductor films from which LEDs are formed.

As a result, global LED manufacturing capacity is set to ramp quickly. SEMI says that capacity reached 4.35 million wafers per month in 2010, and will rise 50% this year to reach 6.5 million wafers per month. Those figures relate to 2-inch equivalent wafers, although many of the top-tier manufacturers already use 4-inch wafers and are in the process of transitioning to 6-inch production. Thousands of LEDs can be fabricated on each wafer, assuming that production yields are good.

Materials investment
Investment in China is now expanding to wafer substrates too. LDK Solar, which until now has specialized in silicon wafers for crystalline solar cell applications, is investing $40 million in a new sapphire substrate production facility with an expected capacity of two million 2-inch wafer equivalents per year. Sapphire is the standard material on which blue and white gallium nitride LEDs are produced, and supplies of the material have become constrained in past periods of strong demand. 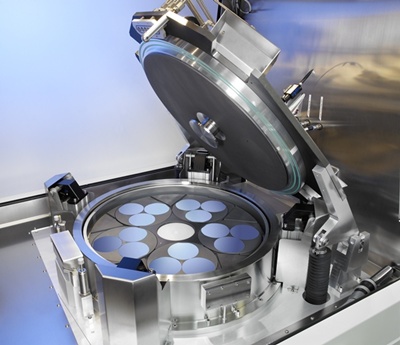 The emergence of a large-scale Chinese sapphire supplier should also help to push down the price of the material, which is a major part of the overall cost of an LED, and so should ultimately help to reduce the cost of solid-state lighting further – seen as a necessity for the technology to become ubiquitous in general lighting applications.

China’s increasing influence in the LED space has been noted previously by the analyst company IMS Research. In the latest issue of its quarterly GaN LED Supply and Demand Report, analyst Ross Young said that China’s share of GaN MOCVD equipment shipments jumped to 64% in the final quarter of 2010, with more to come.

“China’s MOCVD buying spree is expected to continue through 2011 with its share rising to over 70%, resulting in healthy growth in the MOCVD market to over 1000 tools fueling more growth for LED manufacturers,” the analyst noted.

Young added that in the near term advanced TV designs would mean greater LED consumption, in support of new features such as 240 Hz displays, 3D TV and hybrid backlit panels. “Samsung is expected to consume the most LEDs in Q1 2011, after LG Display led throughout 2010,” he said.