The emerging concentrated photovoltaics (CPV) sector has received a major boost, with the signing of a deal to build a utility-scale solar power station based on the technology in southern California.

Expected to be completed in 2015, the 150 MW Imperial Solar Energy Center (ISEC West) facility will be one of the largest solar energy installations of any kind, and the largest CPV facility yet constructed – provided that a US Department of Energy loan guarantee is approved. 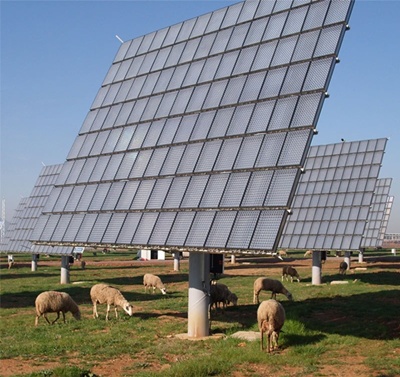 Tenaska Solar Ventures has chosen Concentrix Solar, the CPV technology subsidiary of materials company Soitec, for the site, which will provide enough clean energy for San Diego Gas & Electric to power 55,000 homes. The deal represents a hugely significant commercial breakthrough for CPV technology, which has long been touted as a good fit for utility-scale solar energy production in hot, sunny and dry locations.

To measure that significance, the entire market for CPV systems installed in 2010 was only a tenth of the size of the proposed new plant, at 16.3 MW – according to a recent report by the analyst company Strategy Analytics.

Concentrix, originally a start-up founded by the Fraunhofer Institute for Solar Energy Systems (Fraunhofer ISE), uses Fresnel lenses to focus sunlight by a factor of 500 onto high-efficiency solar cells based on III-V semiconductors, rather than the more conventional silicon or CdTe.

The company is to build a new factory in the San Diego area to manufacture CPV modules in support of ISEC West, as well as other utility-scale projects that are anticipated in the desert areas of the southwestern US. That factory, which will have an annual capacity of 200 MW, is also expected to create around 450 new jobs.

Desert suitability
Aside from requiring a lot less land, and having much lower balance-of-system costs than conventional solar power, CPV systems also perform better in hot locations, because of the low temperature coefficient of the multi-junction cells onto which they focus sunlight.

Detractors of the technology have always pointed to the reliance on clear blue skies for reliable energy production, as well as the additional expense of the two-axis trackers that are needed to follow the movement of the Sun with extreme precision, as weaknesses of the approach.

But the ISEC West deal suggests that at least some power utilities are now convinced that CPV is able to deliver on its technological promise, and is scalable to very high powers. Dave Fiorelli, president of Tenaska’s development group, said: “The ISEC West solar power plant will demonstrate Concentrix CPV scalability, and commercial viability of this innovative technology for utility-scale deployment.”

The Soitec CEO André-Jacques Auberton-Hervé added: “Our CPV systems are perfectly suited to the very high solar irradiance prevalent in the Imperial Valley.”

One key aspect of the deal is that the ISEC West project is reliant on a loan guarantee from the US Department of Energy. That loan scheme is already supporting a number of solar activities, including both cell manufacturing companies and individual power plants.

Soitec says that the ISEC West loan is at the application stage currently. “Upon receipt of the guarantee and closing of its agreement with Tenaska, Soitec will implement capacity investments to construct its San Diego area factory, and pursue options for related financing,” it noted.

“The factory location is anticipated to be announced this summer, with completion expected within 18 months of construction start.” If that all goes according to plan, delivery of CPV systems will begin in early 2013, with the project expected to be completed two years later.