Caryatid sculptures are treated with a dual-wavelength system in a public viewing area at the Acropolis Museum in Athens. 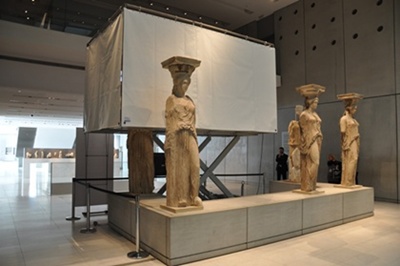 Scientists have set up an advanced laser laboratory in a public area of the Acropolis Museum in Greece, allowing visitors to see how the technology is being used to restore ancient sculptures to their former glory.

The customized laser system has already been used to restore priceless objects including the Parthenon West Frieze and the Metopes, but this is the first time that it has been open to the public.

According to the specialist team from Costas Fotakis' group at the Institute of Electronic Structure & Laser (IESL-FORTH) in Crete that is carrying out the restoration, the combination of a fundamental 1064 nm and a frequency-tripled 355 nm beam from an Nd: YAG system is able to remove thick layers of pollution that have accumulated over nearly 25 centuries, without discoloring or damaging the marble surfaces below. 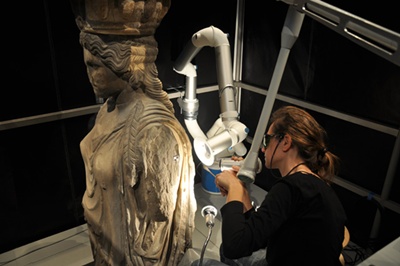 The infrared/ultraviolet technique has been in use for many years now, after initial attempts using just the fundamental wavelength caused a yellow discoloration.

In situ preservation
Although similar artefacts have been restored with the dual-wavelength system previously, this is the first time that such treatment has been applied to the Caryatids, which were moved from their original site at the Acropolis to the museum as recently as 1979.

“The museum policy was to avoid any risky transportation of the masterpieces to a conservation laboratory, and instead perform any preserving activities in-situ,” explains the FORTH team. 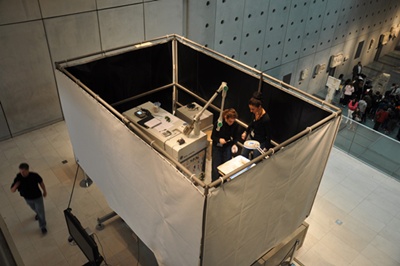 To house the laboratory, the team built a special platform to “embrace” the sculptures and move them to different heights, so that the conservationists obtained optimum access along the surface of the sculptures. The platform is surrounded by protective curtains to block any laser beams and meet health and safety requirements.

The Caryatids are a set of six female statues that were used in place of conventional columns to support the roof of the south porch of the ‘Erechtheion’, regarded as the most sacred part of the Acropolis temple complex. According to the Acropolis Museum, the figures were separately carved in Parian marble and affixed on slabs of grey Eleusinian limestone.

• For more information about the laser conservation project led by the IESL FORTH team, visit: http://www.iesl.forth.gr/research/project.aspx?id=131. For further details about the Caryatid sculptures and the Acropolis Museum, see: http://www.theacropolismuseum.gr/.