The fiber laser company is due back in court soon, but capped a hugely successful year by posting revenue of almost $300 million, up 61% from 2009. 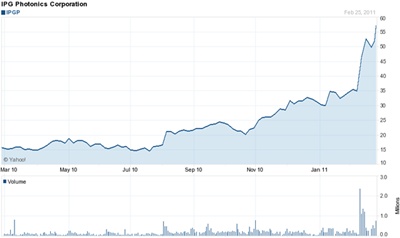 IPG Photonics, the company that dominates the market for fiber lasers, particularly in high-power and materials processing applications, reported a surge in sales during the final quarter of 2010.

Founder and CEO Valentin Gapontsev said that he had noticed a “shift in the market acceptance of fiber lasers”, especially for cutting and welding applications, as quarterly revenues leapt to $101 million on a strengthening global economy.

That figure represented a 26.6% sequential rise in sales from the third quarter of 2010, and pushed full-year revenues to $299.3 million, up 61% on the 2009 figure. Confirmation of the 2010 performance pushed the company's stock price - which has nearly doubled in value over the last few weeks - above $58 briefly, equivalent to a market capitalization of around $2.7 billion.

Encouragingly, IPG noted that the demand for its products is not just ramping in the manufacturing hot-spots of China – even though that region showed the most rapid growth. European sales also jumped 93% year-on-year in the final quarter, thanks in part to prior orders from cutting OEMs in Italy and Turkey, with expectations that similar customers in Japan are set to follow suit:

“We have begun to see some orders and serious interest from Japanese cutting system OEMs,” said IPG’s CFO Tim Mammen. “We are optimistic that Japan can be a larger source of growth in 2011.”

IPG’s laser sales are overwhelmingly driven by materials processing applications, which accounted for 84% of revenues in the closing quarter of the year, and more than doubled from the equivalent period in 2009.

Gapontsev added that during 2011 he expected to see growing adoption of IPG’s 1-3 kW lasers for cutting applications as they replace traditional carbon dioxide lasers, following a pattern already seen in welding applications where the technology has begun taking market share from diode-pumped solid-state alternatives.

Track record
Fiber lasers have a longer track record in micro-engineering and marking applications, but IPG has been at the forefront of expanding that applications base. CFO Tim Mammen also noted that a growing number of cutting systems OEMs were now adopting fiber lasers, and that these early adopters would soon convince rivals to follow suit.

Although traditional metalworking applications represent the vast bulk of demand, Mammen also highlighted traction in some new applications such as laser cladding of parts used in aerospace, and of drill bits used in oil exploration. The company is also benefiting from the fast-growing photovoltaics market, where its lasers are being used for ablation applications in solar panel production.

As well as the strength in Europe and China, there are positive signs in North America, added Mammen: “The US automotive industry is again investing in new equipment, including automated production systems, after recovering from the Great Recession [sic],” said the CFO. “Many are choosing fiber lasers over competing laser and non-laser technologies.”

The stellar revenue growth seen throughout 2010, coupled with better utilization of higher-power diodes manufactured at its laser diode production fab (IPG uses internally-produced diodes in its laser systems), had a huge impact on the bottom-line performance of the company. For the full fiscal year IPG posted net income of $54 million – of which half was delivered in the fourth quarter alone.

For the next quarter, revenues are expected to dip in line with the usual seasonality, and IPG forecast sales of between $89 million and $95 million. But with a backlog of $171.6 million shippable in the coming twelve months, 2011 looks all set to be another extremely strong year.

However, in the short term IPG will face the distraction of its ongoing patent litigation fight with rival IMRA America. The two parties are scheduled to return to court for a summary judgment hearing on March 3. IPG has urged the judge presiding over the case to dismiss IMRA’s actions claiming patent infringement, but if that request is not granted then a new start date for the trial is expected.