Leading photovoltaic module manufacturer is also making inroads into China and India as it looks to diversify geographically. 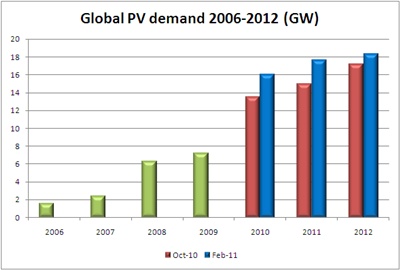 First Solar sold CdTe photovoltaic modules capable of producing a peak power of 1.4 GW in 2010, up 27% on the previous year as the wider solar market doubled in size.

The US-headquartered company, which has production facilities around the world, managed to further reduce the cost of solar electricity during the year.

This is thanks partly to an increase in the average efficiency of the modules that it produces – First's CEO Rob Gillette said that the average module conversion efficiency has increased from 11.1% in late 2009 to 11.6% now, thanks to recent changes made to its fabrication processes. He added that the company aimed to make further efficiency improvements of about 0.5% per year.

Gillette added that the cost per watt (peak) of making those modules now stands at $0.73, down from $0.80 a year ago, equivalent to a 9% reduction.

For the closing quarter of 2010, the company posted total sales of $610 million, down sequentially due to the timing of some large contracts, but for the full fiscal year sales were close to $2.6 billion – up 24% on 2009 and indicative of the boom experienced by the wider market.

The German solar market was rampant during 2010, and accounted for just under half of First’s revenues. But with reduced feed-in tariffs in the country and a good deal of uncertainty across the rest of Europe, First is working hard to diversify its markets – with a good deal of success. The company is engaged in some of the biggest photovoltaic projects planned for the US and is also making a mark in Asia, where it has signed significant deals in both China and India recently.

Those deals include a 30 MW project with China Guangdong Nuclear, and a pair of module supply agreements for a combined 40 MW with ACME and Moser Baer in India.

Consensus forecast
The geographical diversification of the photovoltaics market will be a critical aspect of its development over the next couple of years as Germany winds down its tariff support, and the US, China and India have all emerged as key locations.

First’s consensus market forecast suggests that demand for PV from the US will grow from approximately 1 GW in 2010 to 2 GW this year and 3-4 GW in 2012, as some very large utility-scale projects are constructed. At that point, demand from the US may even start to rival the German market on an annual basis.

In India, the National Solar Mission is targeting deployment of 22 GW (peak) of photovoltaic production by 2022 – a cumulative total that is greater than the entire annual market currently. China is also growing fast, but although China’s government is publicly committed to some aggressive renewable energy goals, First said that the reality might be compromised by a more challenging economic situation there.

Overall, First said that it expected global PV demand to grow by about 10% in 2011 to approximately 17.6 GW. That would represent a major slowdown from the boom year of 2010, where demand more than doubled on the 2009 figure.

In its financial guidance for 2011, the company said it expected to deliver module sales of between $2.8 billion and $2.9 billion, as well as $900 million in project development (excluding modules).

The increased demand will be met by First’s newly expanded production facilities in Malaysia and Frankfurt, Germany, with the company expecting to have a capacity of 2.25 GW in 2011, growing to nearly 2.9 GW the following year thanks to new facilities in Vietnam, France and the US.